St. Anne’s-on-the-Sea serves the town of St Anne’s – part of the conurbation of Lytham St Anne’s. The station opened in 1876, one year after the resort of St Anne’s had started to be built. It lost its Up Side platform in 1986 (although this is still visible), when the line was reduced to single track and most of the station was razed to the ground. A tiny building was erected to house a ticket office and is staffed on a part-time basis.

St. Anne’s is not an old town, it was a 19th century planned town and was officially founded on 31st march 1875 when the cornerstone of the St. Anne’s Hotel was laid. The town as developed to a plan by a local businessman Elijah Hargreaves who saw the benefit of attracting visitors from the mill towns to the east. St. Anne’s still retains its Victorian and Edwardian charm and is popular with those who prefer a quieter seaside resort rather than big brash Blackpool just up the coast!

St. Anne’s is the original home of ERNIE the Premium Bond number selector and was a internationally renowned sand-yachting venue until this was suspended by the council in 2002 following a tragic accident. The town also hosts a number of kite flying events and these take place near the pier on the large expanse of beach that is revealed at low tide.

A series of films is being made for Community Rail Lancashire by a local creative film company Huckleberry Films which are designed to encourage people to Explore Lancashire by Rail. A film has been made for the South Fylde Line and is about a linear walk from Lytham Station to St.  Anne’s-on-the-Sea station. This can be viewed by click on the link below.

A map of the route can be seen below and is with thanks to the Ordnance Survey who hold copyright for the mapping. 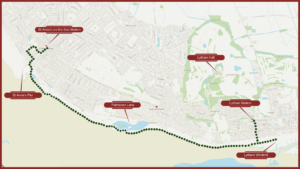 SD 32289 – for a map visit www.streetmap.co.uk and enter the grid reference.