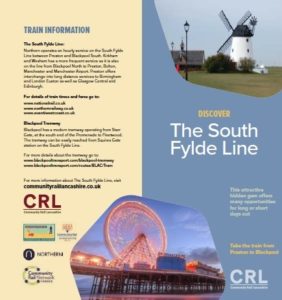 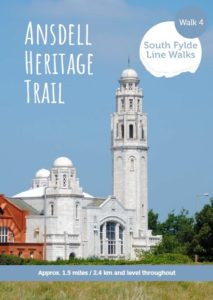 But the station volunteers had been busy all week with other things to help celebrate Community Rail Week and to make preparations for the Queen’s Platinum Jubilee – see text & images below.

On Monday at St Anne’s Station, two different community groups based in the town added their contributions to brighten up the station approach.  First off saw the Knit Together group based at St. Anne’s Library put up three seascapes with knitted fish and other sea creatures attached to a net – all very appropriate for a town ‘on the sea’ which has its origins in a fishing community. 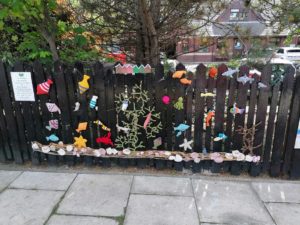 This was followed by members of the Senior Moments Hub who brought their decorated crowns along and attached them to the fencing adding colour and interest to what was otherwise bland black fencing. Station adopters at St Anne’s provided the materials and templates and the members did the rest, adding colour and ‘jewellery’. 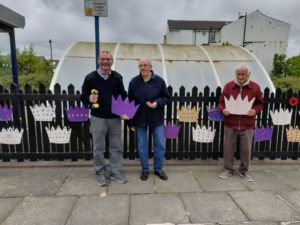 On Tuesday, the station volunteers tweaked the ‘yarn-bombing’ with protective netting to make it less prone to some of the sea creatures ‘swimming off’.  Some of the team also did some baking in advance of the big event the following day. O)

At Squires new artwork, courtesy of Shirley Bradbury went up. She was challenged to do something with some faded Dibond and now the station boasts some rail related images. 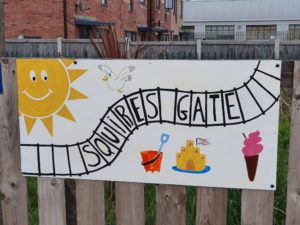 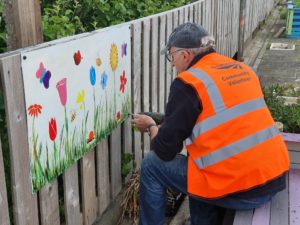 On Wednesday we launched the new South Fylde Line Guide  (suggest link to pamphlets is attached) The Mayor and Mayoress of St Anne’s Cllr Ben Aitken and Ms Brenda Nolan joined Richard Watts, the Chairman of Community Rail Lancashire and representatives of other station groups along the line to launch the new publication. It was designed to encourage more people to visit the many attractions along the line between Preston and Blackpool South. Guests were treated to refreshments from the ‘pop up’ tent and  shown the work of the volunteers. 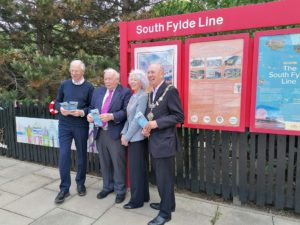 Later in the day, Chairman of the SFL Tony Ford welcomed guests at Ansdell & Fairhaven station to launch the latest in the series of Railway Walks that can be accessed from the stations. This walk, making use of the wonderful illustrations and informative text of the Ansdell Heritage Trail is bound to attract more visitors to this delightful ‘village’  tucked in between its bigger neighbours St Anne’s & Lytham.

Following the launch, Lytham-based railway enthusiast and historian Peter Fitton was presented with a basket of fruit for the sterling work he has done in supporting the history posters project at several stations along this attractive rural and coastal line. 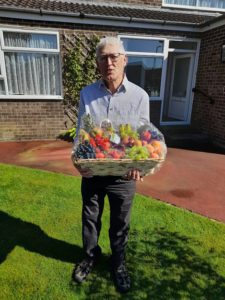 On Thursday it was the turn of the Lytham station volunteers who added a collage poster at the station entrance which depicted images of  King George visiting Lytham Station, with an image of the Queen looking down wearing her Crown. The station was adorned with jubilee bunting and flags, this group of enthusiastic volunteers gave away 70 cupcakes adorned with Platinium Jubilee Logos and a non-alcoholic fizz to visitors and rail travellers.  The Station Tavern which is situated in the original station buildings staged a garden party to mark the occasion.   Additional bunting was erected in Sparrow Park adjacent to the station thus making the entrance to the railway more welcoming. 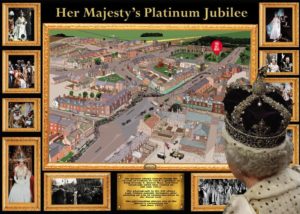 On Friday Tony Ford, the SFL Chairman together with Barrie Russell,  a keen rail supporter,  visited several stations along the line to erect official Platinum Jubilee posters where opportunities for marking Community Rail Week were limited. 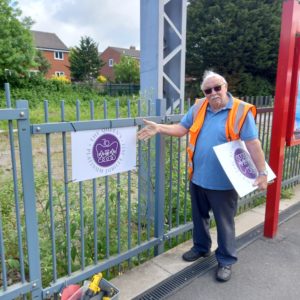 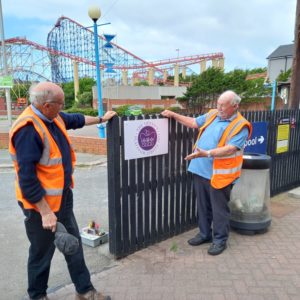