Rose Grove is a suburb of Burnley lying 4 kilometres west of the town centre. It is probably most well known for having one the last steam sheds on British Railways before the demise of steam in August 1968. The station is close to the Weavers Triangle on the Leeds Liverpool canal and to the Padiham Greenway. 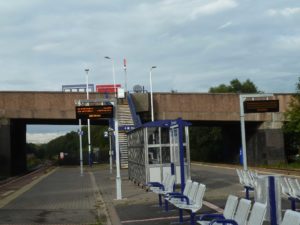 The Padiham Greenway – is an award winning cycle trail and footpath that leads to the town of Padiham.

Gawthorpe Hall – accessible via the Greenway, Gawthorpe Hall has a long history. Built in 1600 it was renovated in the 1850s by Sir Charles Barry who had previously designed the Houses of Parliament. Now in the care of the National Trust, Gawthorpe is a modest Hall and houses the North West’s largest collection of portraits on loan from the National Portrait Gallery as well as The Gawthorpe Textiles Collection, a wonderful collection of intricate lace, embroidery and needlework amassed by Miss Rachel Kay-Shuttleworth.