As part of the introduction of a new service from Blackburn to Manchester via the reopened Todmorden Curve West Curve, Rose Grove station received two extra trains per hour and became an interchange station for travellers from the Colne branch to connect with the new Manchester service.

Two local schools Lowerhouse and Padiham Green took part in six classroom based sessions with CRL Resident Artist, Alastair Nicholson, where they researched the history of Rose Grove as a railway village and the Old Padiham loop line which is now a public greenway. Lowerhouse focused on the history of Rose grove station and how the railway shaped their community and Padiham Green researched the engine shed history and that of the Padiham loop. Both schools produced art work which was then displayed at the station.

Rose Grove engine shed was one of the last steam loco sheds to close in the country and was an inspiration to Padiham Green School who after looking into the folklore of the shed wrote an innovative story of a journey a stickleback made from Rose Grove to Manchester via the Todmorden Curve. Both a book and DVD of this story were produced.

Rose Grove engine shed was once home to lots of steam engines which worked local lines delivering goods and passengers all over East Lancashire and beyond. The water used to fill up the water tanks of the steam engines was drawn from the nearby Leeds and Liverpool canal which ran alongside the rear of the engine shed. When the engines were sent away to Crewe Locomotive Works for repair it was said that the men who worked at Crewe could tell that the engine came from Rose Grove because when they came to drain the engine tanks they were full of sticklebacks which had been sucked in with the water from the canal.

As part of promoting the new Manchester service CRL wanted to raise the profile of the Padiham Greenway which is a cycle/walking route that follows the course of the old North Lancashire loop line from Padiham to Rose Grove and to raise awareness to the inhabitants of Padiham that a new rail link to Manchester was available and readily accessible via the Greenway. This not only raised the profile of the new service but also encouraged locals to cycle or walk the Greenway. The children produced a map of the route which was included as part of a small colourful and attractive pocket timetable containing details of the new service.

A huge piece of artwork using the children’s classwork was erected along the length of the platform end fence and running in boards on the same theme were produced.

Rose Grove station is not easily visible from the access road so a steel sculpture was designed and fit at the station entrance to make the entrance more visible. As a reward for their work both school were invited to make a journey from Rose Grove to Manchester via the curves. A launch day saw both sets of children gather on the platform along with local dignitaries to witness the unveiling of the art work and launch of the book which resulted in some very positive media reports in the local newspaper. 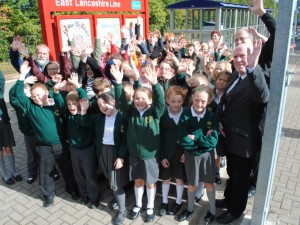 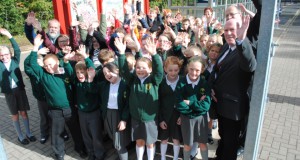 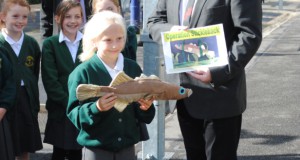 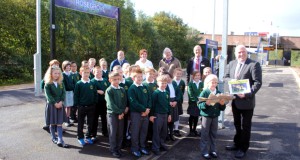 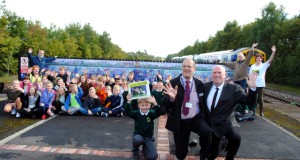 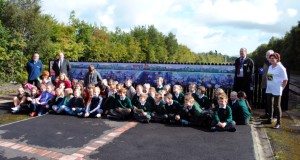