Rochdale – is a town in Greater Manchester at the foothills of the South Pennines on the River Roch, 15.6 kilometres northeast of Manchester. Rochdale rose to prominence in the 19th century as a mill town and centre for textile manufacture during the Industrial Revolution. It was a boomtown of the Industrial Revolution, and amongst the first industrialised towns. The Rochdale Canal – one of the major navigable broad canals of the United Kingdom – was a highway of commerce during this time used for the haulage of cotton, wool and coal to and from the area. 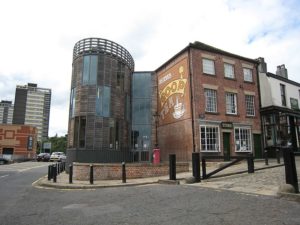 Rochdale is the birthplace of the modern Co-operative Movement, to which more than one billion people worldwide belonged in 2012. The Rochdale Equitable Pioneers Society was founded in 1844 by 28 local residents as a response to the high cost and frequent adulteration of basic foodstuffs by shopkeepers at the time. The Pioneers were notable for combining the notion of the patronage dividend alongside investing trading surplus for member benefit, especially in education. The Rochdale Principles, the set of ideals which underpinned the society, are still used, in updated form, by the International Co-operative Alliance. The Rochdale Pioneers shop, in Toad Lane that opened in 1844, was the precursor to The Co-operative Group, the largest consumer co-operative in the world.

Six Day Market – The brand new market (approx. 10 minute walk) is open for business, with around 37 traders selling a host of products including fruit and vegetables, jewellery, clothing, footwear and haberdashery. Handily located right next to the town centre Metrolink stop, a 214 space car park and the town’s new bus station, it’s the ideal place to pick up fresh food and one-off items.

Touchstones Art Gallery – a 15 minute walk from the station, Touchstones offers a wide variety of exhibitions in the Heritage Gallery and the Art Gallery’s four gallery spaces including those from the local community, selections from the borough’s impressive art collection and work by contemporary artists.

Rochdale Pioneers Museum – a 20 minute walk from the station the museum is on the site, 31 Toad lane, where the ‘Pioneers’, 28 working people opened a co-operative store on 21st December 1844. The shop sold fairly priced, quality food during very hard times.

Greater Manchester Fire Service Museum – is less than a 5 minute walk from the station and tells the story of fire fighting, particularly in the Greater Manchester region. Manchester formed England’s first municipal fire service in 1826, whilst the country’s earliest motorised fire engine was delivered to Eccles in 1901.

The Blue Mosque – Neeli Masjid is approximately a 6 min walk from the station and was completed in 2006.

Town Hall – Rochdale Town Hall is a Victorian-era municipal building in Rochdale, Greater Manchester. It is ‘widely recognised’ as being one of the finest municipal buildings in the country and is recorded in the National Heritage List for England as a designated Grade I listed building.

Rochdale Parish Church – the parish church of St. Chads is a 10 minute walk from the station. There has been a church on this site for over 1000 years and some parts of the present church tower date back to Saxon times.