A rather forlorn tree stump, left behind after a dead tree was removed from the station car park has become an eye-catching location for two wood sculptures in St Anne’s. 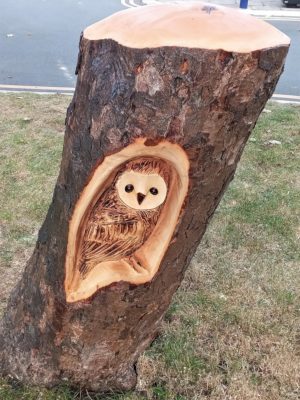 Network Rail removed the tree for safety reasons and the Friends of the Station suggested that the stumped, suitably modified could be used creatively and that proved to be the case. Local artist James Sheliker from Acorn Woodcraft was approached and he agreed to make something of the stump straight away as he had just had a job cancelled.

A hastily-arranged grant from the Town Council, backed by a contribution from Community Rail Lancashire meant that James Sheliker from Acorn Woodcraft was showcasing his talent within just a few days of the tree being felled.

These wooden sculptures are a real coup for the station adding to the recent Hidden Gems artwork that adorns the platform area and the booking office. 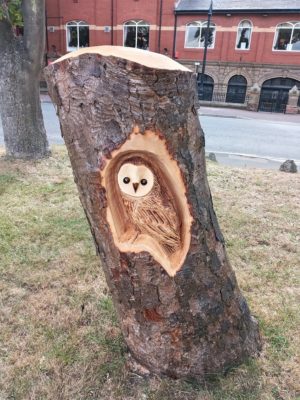 Station volunteer Margaret Beddoes who suggested an owl as a possible subject for carving  said, “They looks amazing, I am so pleased with what James has produced for us!”

Whilst the intricate work was taking place,  it caught the eye of numerous passers-by who all commented positively about what was being created right in front of their eyes.

“It’s so refreshing seeing such an accomplished craftsman at work,” commented one passer-by.

James Shelliker of Acorn Woodcraft said, “I was really pleased to be asked to undertake this piece as I am local to the area and value working with and supporting local projects. It was good wood to work with and I am pleased the owls have such a prominent position at the front of the station.”

Tony Ford, long-serving Chairman of the Station Friends group said; “It is a real boost for the station and we were so pleased to be able to use a local artist to create these sculptures. They have become a real talking point locally already.”

He added, “ There are a couple more trees that are in a poor state so it may be possible to have some more sculptures created in a few months time.”

The station Friends are becoming known for their innovations and have been shortlisted for an award by the Community Rail Network. The groups Christmas trees, created from disused pallets, gained a lot of media attention last year. The annual Community Rail Awards taking place in Southampton in December are a national event that recognises the hard work and dedication shown by volunteers and station adopters across the country.