At the recent meeting of the Clitheroe and east Lancashire CRPs members were updated on the entrance to Whalley Station.

When the station was re-opened in 1994 a special wooden entrance was added to give the station a bit of a presence. The theme was based on the Lancashire Red Rose and the nearby Whalley Abbey. The structure was part funded by the then British Rail Community Unit and Lancashire County council Railside Revival fund. However, the wood has had 25 years out in all elements and had begun to show considerable signs of rot as the lop sided sign in the picture illustrates. Following concerns raised by the Friends of Whalley Station and the Parish Council, Northern decided the best course of action was to take it down.

This presents an opportunity to look at doing something different at this entrance. So Brian Haworth, the line community rail officer, and Alastair Nicholson, a local artist, are developing ideas for what could be done and hope to involve a local primary school in the project. 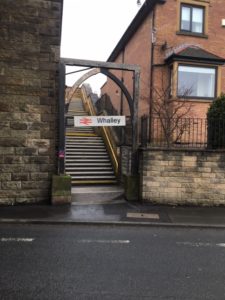 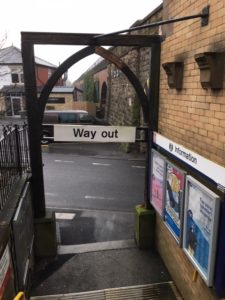 One mystery remains where is the red rose? It had been taken down slightly earlier , as the picture shows, and is now probably stored somewhere – but where?

If anyone knows of its whereabouts please email on mailto:info@communityraillancashire.co.uk