A ceremony took place on Tuesday 23rd April 2019 to officially unveil a memorial at Whalley station.

Richard Watts speaking before the unveiling

2018 marked the end of World War 1 and the event was commemorated across the country. Community Rail Lancashire’s Brian Haworth wanted to do something to mark the event and choose to look at the role of the Queen Mary’s Military Hospital, close to Whalley station, and the railway that linked it to the main Blackburn to Hellifield line.

The First World War was a major conflict lasting nearly 4 years during which there were many hundreds of thousands of casualties. Queen Mary’s Military Hospital helped some of those injured during the war to regain both their physical and mental health again. The nurses and doctors at the hospital played a vital role in helping these wounded men.

In remembering the role that Whalley played in the war we also need to remember the role the railway played in getting the wounded away from the battlefield trenches to the hospital and peace of Whalley. Special ambulance trains were created that could bring the soldiers the hundreds of miles from the Western Front all the way to Whalley.

The memorial that we are unveiling today depicts the journey from the front line to Queens Mary’s Hospital from the vibrant red depicting the battles to the more peaceful greens and blues. The art work shows clearly the journey the soldiers travelled to regain their health and the vital role played by the railway in helping them arrive at the hospital. 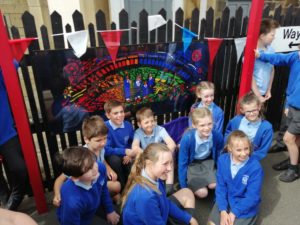 Children from Whalley Primary School by the memorial on the station 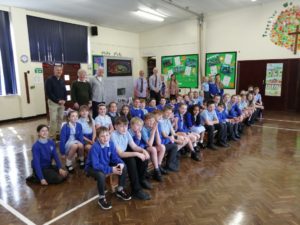 Back at school for refreshments

In numbers, Queens Mary’s Military Hospital looked after nearly 60,000 soldiers a tremendous number when you think that the population of Whalley today is around 4,000 people.

In developing this memorial, I would like to thank the roles played by: