On 26th Jan 2017 around 50 people attended the unveiling of the children’s art work at Langho railway station. Children from both village primary schools St Mary’s and St Leonard’s had spent time designing a logo for the Langho in Bloom group producing lots of colourful artwork in the process.

When Community Rail Development Officer, Brian Haworth, saw the quality of the art work he suggested that it was used to create some welcome boards for Langho station. All agreed and local artist Alastair Nicholson was engaged to produce the work. 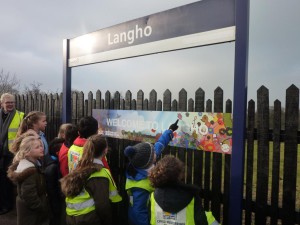 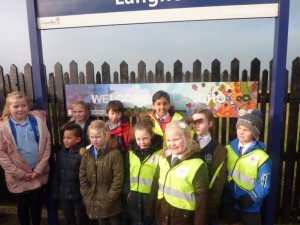 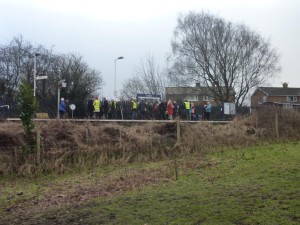 The colourful finished boards were unveiled by the children of both schools. James Syson, Chairman of the Clitheroe Line Community Rail Partnership, addressed the guests and spoke of the good community spirit this type of project fosters. He thanked Langho in Bloom and Friends of Langho station for their sterling work both on the station and in the surrounding area. He also thanked both schools for their hard work and involvement. Matt Worman, speaking on behalf of Northern Railway, thanked all involved and said that Northern Railway were keen to work with local community groups and were hoping to see similar artwork produced on other local stations.

The project was supported by a grant of £490 from the Association of Community Rail Partnerships (ACORP) Small Grants Fund and with match funding from the CRP and in kind by the Langho in Bloom volunteers.