News
Transformation Of Train Services Across The North

Plans for a phased programme of benefits to be delivered to customers as part of Northern Programmes – the largest railway upgrade in the north of England since Victorian times, were unveiled yesterday (Thursday 10 November 2016).

As part of the programme, Network Rail, supported by train operators TransPennine Express (TPE) and Northern, has announced that changes expected in December 2017, a key milestone in service development in the north, will be delivered in phases to enable the fastest possible deployment of a series of major improvements to services.

The Northern Programmes will transform rail transport in the north delivering more trains with more spaces to more towns and cities. From December 2017 there will be improved services, including electric trains with more space for customers running between Manchester and Preston via Bolton. 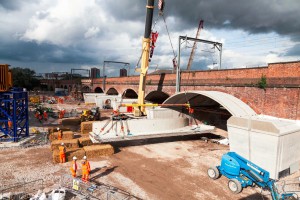 There will also be new direct services to Manchester Airport from across the north enabled by the Ordsall Chord, a vital new rail link connecting Manchester’s three main stations, Victoria, Piccadilly and Oxford Road, for the first time, as well as new connections into Manchester from the Calder Valley.