The event took place at Urbis close to Manchester Victoria station and saw a host of speakers talking about the benefits of the new service and praising the partnership working that helped bring in the funding needed to carry out the work on the curve.

The event was hosted by Burnley Borough Council and the guests were welcomed by John Clayton, Editor of BBC Radio Lancashire. The first speaker was Dr. Pete Waterman who stressed the importance of the new link between Burnley and the rest of East Lancashire and Manchester.

Next on the podium was Cllr John Fillis, Cabinet Member Highways & Transportation speaking on behalf of Lancashire County Council. Cllr Fillis said; “it is a great privilege to be here today to formally mark the introduction of the new direct rail service between Manchester, Burnley and East Lancashire. The project is the culmination of significant partnership working between local councils, the rail industry and government over many years. I would like to take this opportunity to acknowledge the crucial role which each partner has played in bringing this project to fruition.” 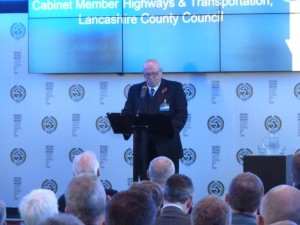 Cllr John Fillis at the podium

Cllr Mark Townsend, Council Leader for Burnley Borough Council added in his speech; the re-launch of the Todmorden Curve service, providing Burnley with a direct train to Manchester for the first time in over 40 years, is a milestone in our economic growth. It will provide easier access to the jobs market in Manchester, giving people real choice in where they work.” 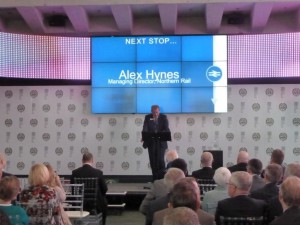 Alex Hynes lends his support to the project