News
Thoughts From The Footpath

Having made the decision to go on one of the Community Rail Lancashire guided walks I was disappointed to wake up on the walk day to find the rain pouring down and the grey skies loaded with the promise of more rain to come. Having made and packed my sandwiches and added a small tot of Irish Whiskey to my flask of coffee ( to combat the cold rain) I squelched up the road to Langho station to catch the train to Ramsgreave and Wilpshire Station, the advertised starting point of the walk. Emily and ‘Alfie’, her energetic dog, accompanied me and we were met off the train at Ramsgreave and Wilpshire by our guide for the day. 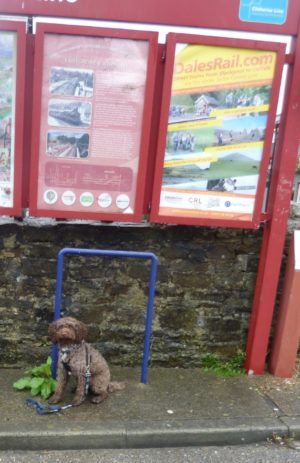 Due to emergency timetables being in place the walk set off later than advertised as we had to wait for the service from Blackburn to arrive in case it was carrying any one for the walk. As the rain grew heavier six of us plus ‘Alfie’ set off and headed out of Wilpshire via Eddy Holes climbing steadily until we reached Parsonage reservoir. As we climbed away from the reservoir passing the fast flowing overflow culvert the rain became torrential and within a few hundred yards we were all soaked to the skin. Looking back at the reservoir beneath the leaden sky I half expected an ark to appear! We had a snack stop in a roofless ruin of a barn adjacent to Middle Mickle Hey Farm which afforded us some shelter from the monsoon conditions. All the many streams we crossed were running fast and furious and conditions underfoot were damp to say the least.

Travelling across Cunliffe ridge the remains of several stone quarries were seen and looking down the valley from the triangulation point the route of the old North Lancashire loop line could be easily picked out winding through the valley below towards Great Harwood. 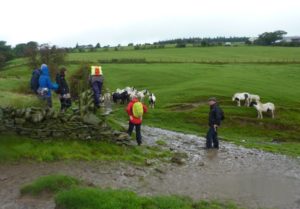 Tan House farm was passed through with the farmer up to his knees in a flooded stream trying to clear a blocked culvert which was threatening to flood over into the farm yard. Also of interest amongst the array of old wagons lying around was a Mathew Brown* trailer.

Our walk continued as did the rain and we passed through Tan House Farm and alongside Top o’th Heights quarry. From here a short climb brought us up to Dean Clough plantation and then down through the plantation to Dean Clough reservoir. The overflow here was running very fast aided by the continuing heavy rain. The steep climb from the reservoir to Whittle Hall was made and it was good to hit some firm tarmac on Moor Lane after some of the sodden field paths we had traversed. A short distance along the lane saw us turn off across a field path which brought us to the viewing point on Billington Moor known as Cronshaw Chair . An amazing thing happened as we sat on ‘Brian’s Seat’ the rain stopped and blue sky could be seen appearing from the west coast as the last of the black clouds disappeared. We then dropped down to Langho via Doctors Rake and back to the railway station at Langho to catch a train to take us back to our starting point at Ramsgreave and Wilpshire station.

Obviously the weather could have been kinder and John Barnes who takes part in all the walks confirmed that we had experienced the worst weather of any of the programme of walks this year!

Numbers were down due to the weather there is normally around 25 on the walks. Speaking to two of the ladies on the walk, one from Oswaldtwistle and one from Clitheroe both agreed that they found the walks very enjoyable with knowledgeable guides and friendly participants so give them a try and get involved, the weather can’t be that bad again!!

If you fancy joining one of CRL’s guided walks then there two left in the current programme:

Then the new autumn/winter programme starts in October.