The New Todmorden Curve (Stickleback Line) service started in May 2015 and gave stations in East Lancashire a direct rail service to Manchester Victoria, Salford and beyond. 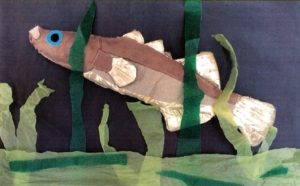 One of the stations, Rose Grove, has seen its trains double from two an hour to four and as part of the celebrations around the start of the new service and the refurbishment of the station two local primary schools got involved in designing some artwork for the station.

Lowerhouse Junior School and Padiham Green CE Primary School took part in six classroom based sessions with Community Rail Lancashire’s resident artist, Alastair Nicholson, where they researched the history of Rose Grove as a railway village and the old Padiham Loop line which is now a public greenway. Lowerhouse focused on the history of Rose Grove station and how the railway shaped their community and Padiham Green researched the engine shed history and that of the Padiham Loop. Both schools produced art work which was then displayed at the station.

Back in the days of steam on British Railways, Rose Grove was an important station and depot with miles of sidings filled with coal wagons and an engine shed. Rose Grove was one of the last steam sheds to close in 1968 when diesel engines finally replaced all steam engines across the country.

The steam engines that were housed at Rose Grove shed worked the local lines delivering goods and passengers all over East Lancashire and beyond. The water used to fill up the water tanks of the steam engines was drawn from the nearby Leeds Liverpool canal which ran alongside the rear of the engine shed. When the engines were sent away to Crewe locomotive works for repair it was said that the men who worked at Crewe could tell that the engine came from Rose Grove because when they came to drain the engine tanks they were full of sticklebacks which had been sucked in with the water from the canal.

This inspired the children from Padiham Green and they used this folklore tale to write an innovative story called Operation Stickleback about Small Fry, a stickleback, who made the journey from Rose Grove to Manchester and back via the Todmorden Curve.

The Train service between Blackburn and Todmorden ( and Manchester ) is funded by Lancashire County Council and operated by Northern.