The Bentham Line and the Leeds-Morecambe Community Rail Partnership (LMCRP) are celebrating a special two-year anniversary. On 23rd January 2019 at Leeds railway station a train was named ‘The Bentham Line – A Dementia-Friendly Railway’ by Peter Wilkinson, Managing Director of Passenger Services, Rail Group, at the Department for Transport (DfT). 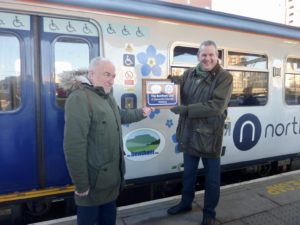 The naming of the Class 150 unit was in support of the innovative work undertaken by the Bentham Line’s ‘Dementia and Community Rail’ project team.  This particular class of unit was chosen, as it is can cover all of the extensive Northern network.  The train acts as a ‘roving ambassador’ for the work of the team over much of northern England.  The project is regarded as a prime example of what can be achieved and should be done to support and welcome those with hidden disabilities, their carers and supporters to the railway and to enjoy the benefits of this scenic route and its communities.

The unit has been in regular service since the naming ceremony and in the last month has been seen as far away as Nottingham, Lincoln, Scunthorpe, Gainsborough, Doncaster, Huddersfield and Manchester, as well as working on the Bentham Line itself.  Travelling between 200 and 600 miles each day the unit has clocked up over a quarter of a million miles over the past two years, equivalent to 10 laps of the Earth, and will have been used by millions of people and seen by many more. 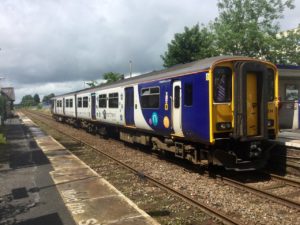 It was the first time that the thoughtful design has been applied to a train based on the ‘forget-me-not’ symbol adopted on the Bentham Line.  The symbol is very appropriate, as whilst someone living with dementia may forget, they are certainly not forgotten by others, who assist them and enable them to live as full a life as possible. As well as the colourful and striking external display there are there are informative posters inside and dementia-friendly signage for the priority seating and the toilet.

The concept of the Community Rail and Dementia project started within the communities along the route. Northern have been very receptive to the project and backed it with generous seed-corn funding.  The keenness of the team to deliver the project has generated considerable support and enthusiasm within Northern and at the Department for Transport.  There have been many enquiries about the project from other train operating companies and community rail partnerships.

Pete Myers, Stakeholder Manager for Northern, who is very enthusiastic about the community work undertaken on the Bentham Line said:  “The Bentham Line is special: it runs through some of the most beautiful countryside that our nation has to offer; the towns and villages are picturesque yet offer plenty to do. It encompasses the coastal scenery of Morecambe, the magnificent cities of Lancaster and Leeds, and the beautiful rural scenery of the Forest of Bowland AONB and the Yorkshire Dales National Park.”

For him the most important aspect of the line is the dementia-friendly approach.  “The Bentham Line’s Community Rail Partnership (LMCRP) has people involved who really know what the ‘C’ stands for in their name.  Their work with the communities that they serve is terrific, with links to schools, tourist attractions, councils and interest groups all very strong. However, it is their work with the wider community that I find really inspiring.  The Bentham Line is dementia friendly, and they truly mean to live by that statement, working with groups and those living with dementia in the areas that they serve”.

He added; “The railway is far more than a means of transport and when things are done well through a CRP we can make a real difference. With the LMCRP’s continuing work, the Bentham Line does just that every day of the week. I, for one, am privileged to be just a small part of what they do.”

Gerald Townson, Chairman of the LMCRP, in thanking Northern for their kind and generous ongoing support commented; “It is a pleasure and privilege to support those living with dementia and other hidden disabilities to enjoy life to the fullest extent possible. We are very much looking forward to welcoming more community groups to the line in the future, when circumstances permit. In the meantime we are working on new destination and activity possibilities and we are constantly looking for new ways to help community groups get the most from their railway.”

This project is also benefitting from the positive support of the Alzheimer’s Society, Alzheimer’s Research UK and the Community Rail Network formerly known as the Association of Community Rail Partnerships), as well as many local groups along the line.