The Leeds-Morecambe Community Rail Partnership (LMCRP) was pleased to welcome the pupils and staff from  Clapham C of E Primary School, along with parents and supporters to Clapham station on Monday 13th July 2020 to receive the rail-safety artwork they had helped prepare. 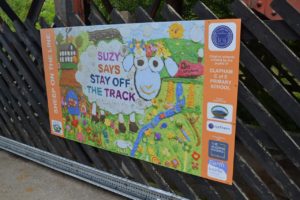 One of the recently installed ant-trespass panels at Clapham station

Brian Haworth, Partnership Officer, thanked all for coming along to the socially-distanced event and spoke about the safety, history and art activities that the youngsters had undertaken with the Partnership earlier in the year at the school, at the Carnforth Station Heritage Centre and at the CRP’s headquarters at Bentham Station.

Gerald Townson, Chairman of the CRP, congratulated all who had been involved in the ‘Sheep on the Line’ project from the school and the CRP.  He commented; “an important aspect of our community rail work is to promote safety on and around the railway, and the young people of Clapham have certainly found a colourful way of getting their safety ideas across to the travelling public. Their important stay-off-the-track message comes at a time when there has been an increase in trespassing on the railway across the country.”

Having presented the original framed artwork to the pupils Gerald invited them to unveil two panels which had been recently installed on the platform fencing. The pupils revealed two vibrant panels created from their ‘Suzy the Sheep’ artwork, one on each platform. The youngsters enthusiastically recalled the elements of the design they created with the partnership’s staff and professional artist, Alastair Nicholson, who had assisted with the project.

Adam Kay, Head of School, thanked those involved and added; “the pupils and staff have thoroughly enjoyed the activities and we are all grateful for the time and kindness shown by the CRP’s staff.”

Sadly, this was one of the last events for the Clapham School’s children, as later in the week the school closed permanently. On behalf of the CRP, Gerald took the opportunity to wish the pupils and staff every success in their new schools.

Other ‘Suzy the Safety Sheep’ designs have been created by primary school pupils, in Cononley and Carnforth, and are on display at their local stations, as part in the CRP’s ‘Sheep on the Line’ project.

The LMCRP would be delighted to engage with other schools, along the route between Leeds and Morecambe, during the next academic year. The CRP can be contacted by telephone, 015242 98940, email, the.bentham.line@gmail.com and by post at Bentham Station Building, Station Road, Bentham, LA2 7LF. The CRP has a wide range of rail-themed activities to offer based around the current National Curriculum.