In September 2016 there were two celebrations to mark the occasion of the official twinning of Mytholmroyd and Bentham stations. 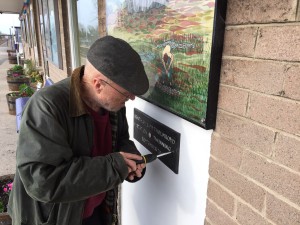 Bob with Gerald, Chair of the friends group

The twinning of the two stations, one on the Calder Valley Line and one on the Bentham Line was developed as a more permanent ‘marker’ of the Station to Station events that took place in June 2016 celebrating the Queen’s 90th birthday and as an encouragement to other station adopters and community rail partnerships to come together to share ideas and developments.

The station twinning was the first of its kind in the north of England and also for Arriva Rail North, the new Northern Franchise holder, in its inaugural year. The sharing of best practice between station adoption groups is supported by Arriva Rail North and is one of the main principles in their new Station Adoption Scheme.