Images promoting a host of particularly attractive features of St Annes have been installed at the town’s railway station. The three montages of photographs, two on the platform and one at the entrance, is part of the Hidden Gems project being developed across a number of Lancashire stations along the South Fylde Line. 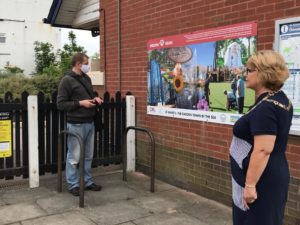 St. Annes Town Council agreed several years ago to fund the artwork as part of the Neighbourhood Plan to improve the entrances into the town. The idea was to brighten up the rail gateway, to link it with local community groups and promote the town as a tourist destination.

The pandemic restrictions meant photographic contributions were sought via word of mouth, local links and via social media, but there were still many more entries submitted than could be used and some may well be used in the future for further montages.

The images, which promote St Annes as a ‘garden town by the sea’, were unveiled by St Annes Town Council chairman and vice chairman Gavin Harrison and Karen Harrison. 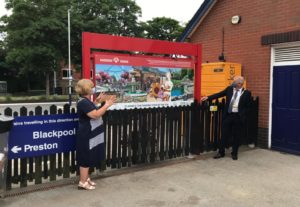 Tony Ford, Chair of SFLCRP said; “The project was a great way to connect with the community despite the restrictions and while we would have liked to have worked directly with local groups, especially schools, we have still been able to deliver a project to enhance our station and offer a colourful welcome to the town for rail users”.

Tony went on to say; “It has taken a while to come to fruition for obvious reasons but although delivered later than planned it comes at just the right time as restrictions are being eased and people are being encouraged to use public transport and enjoy ‘staycations’, putting our town at the forefront of the visitor economy.”

Councillor Gavin Harrison said: “The photomontages create a bright welcome for visitors to our town, highlighting many sights and features of interest and they will encourage people to explore St Annes. This project also fits in with our work to attract artistic talent and businesses to town, for example the thriving Craft Quarter centred around St Andrews Road South.

Councillor Karen Harrison added: “These montages give a really colourful lift to the station alongside the floral displays that the In Bloom group works so hard to provide.”

Katie Musgrove, from Community Rail Lancashire who liaised with the designer and printers said “The artwork looks stunning. Hopefully all the contributors will choose to visit at some point and see their wonderful images in situ. We would have liked to invite them all to the unveiling, but the social distancing restrictions meant that was too much of a challenge.”

A short film showing the project and the unveiling can be seen on the link below:

There are plans for the Hidden Gems project to be extended to other stations along the South Fylde Line with the easing of restrictions later this month. This will allow community groups and schools to identify and photograph the Hidden Gems in their locality with a view to them going on display soon after.

The Friends of Lytham Station have expressed an interest and work has already begun at Kirkham and Wesham Station with input from Pear Tree School.

As well as the Hidden Gems panels being installed,  some existing panels, produced several years ago by pupils of Heyhouses School have been replaced as the colours have faded in the sunlight. 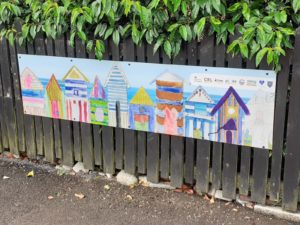 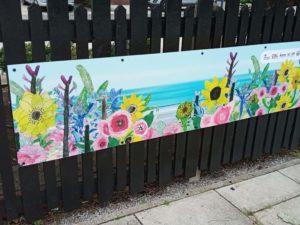