The South Fylde Line Community Rail Partnership (SFLCRP) has learned that a bid into the Department for Transport’s ‘Restoring Your Railway Ideas Fund’ for a passing loop on the line has been successful in round two of the bidding.

This scheme would add a passing loop and associated signalling to the South Fylde line, which runs from Preston to Blackpool South, and is classified as a long siding from Kirkham to Blackpool South. The loop would allow the number of services to double from the current one per hour, and would involve the construction of a new platform at Ansdell and Fairhaven Station.

The increase in services and the ability to use a passing loop would also allow for better punctuality and a reduction in the number of cancelled services, and the considerable number of services turned back before reaching the terminus at Blackpool South, which are not counted in the operator’s cancellation figures and amounted to the loss of more than nine days’ trains in the past year alone.

The infrastructure required would be approximately three miles of track in the area between St Annes and Lytham, and associated signalling. A new platform and access would be required at Ansdell and Fairhaven Station, along with access.

Tony Ford, Chair SFLCRP said; “I am pleased that the proposal for installing a passing loop along the South Fylde LIne has made it through to the next round of the process. I only hope that much of the work to develop a business case utilises the supportive information already available from the Jacobs Report rather than going over old ground. This project needs to move forward to benefit both local rail users and the many visitors coming to the Fylde coast resorts.”

Richard Watts Chair CRL commented; “This is excellent news and takes us one step further along the line of reversing the short sighted policy that saw the line singled in the 1980s. Ever since then the capacity of the route has been limited to just one train each way per hour. The success of this application to the ‘Restoring Your Railway Ideas Fund’ means that we can now start to develop the case for the provision of a passing loop to enable a more frequent service to operate. CRL will do all it can to support this welcome initiative and the backing it has received from the 2 local MPs – Mark Menzies and Scott Benton.” 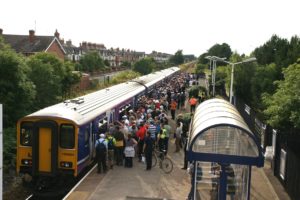