To mark the centenary of the final year of the WW1, the Royal British Legion invited the public to take part, saying ‘thank you’ to those who fell, serving either at home or in the towns and fields fighting. 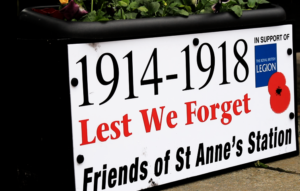 The Friends of St. Annes Stations decided that their contribution would be some ‘silent soldiers’ and planters on the station car park at St. Annes station. In a ceremony yesterday, 31st October 2018, the soldiers were unveiled.

A small group of people including members of the public, the friends group and Arriva Rail North Managers, gathered to hear St. Annes Town Crier, Colin Ballard, start proceedings with his usual panache and Town Councillor Tony Ford, Chair of the Friends Group, and the South Fylde Line CRP make a speech. 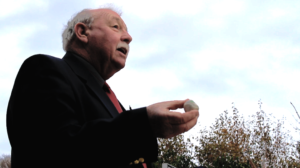 St. Annes Town Mayor, Cllr Karen Henshaw then made a speech and unveiled the installation of ‘silent soldiers’ and planters. 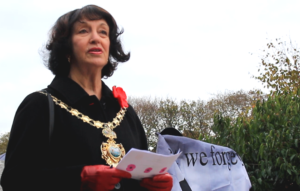 “They shall not grow old, as we that are left grow old: Age shall not weary them, nor the years condemn. At the going down of the sun and in the morning, we will remember them”

For the Fallen, Robert Laurence Binyon