As a result a decision was made that members would adopt the station as an on-going project, with the objective of returning the station to its former glory. Therefore volunteer Rotarians and Friends of Rotary agreed to turn up at the station every Saturday morning (other than winter) to tackle the many areas which had been neglected. 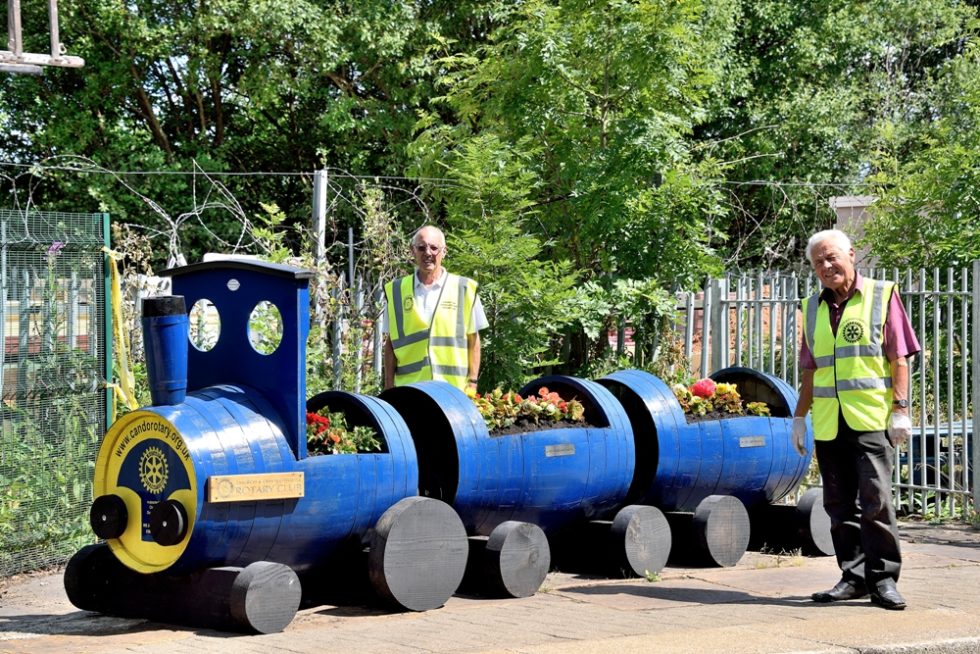 The two platforms at this station must be one of the longest on the whole route from Blackpool to Colne – each one is over 100 yards long, and at the commencement of improvements both were covered entirely in weeds. It is pleasing to report that all the weeds have been removed although they need constant action.

Painting both inside and outside the station was a priority especially the subway entrance, which apart from being very grimy was a breeding ground for pigeons. We have been significantly helped by ISS contactors appointed by Arriva Rail North (Northern), whereby they have undertaken much of the painting.

Outside the entrance to the station the undergrowth approximately 30 yards long has been removed and 4 tonnes of chippings laid down, complimented by Rotary members building two large planters which were financed by the Prospects Foundation.

Again we have been helped by Northern by addition planters being installed on both platforms which now have had begonias planted in them. Now in full bloom they certainly give the station a definite uplift.

But what is the ‘Show Stopper’? This is a large model wooden engine and coaches ( photo above) which is sited on the Colne platform, this model train brimming with begonias is attracting a great deal of favourable comments and without doubt really gives the station a real lift.

This model train was the idea of immediate Past President Jim Hargreaves who proposed the purchase, delivery and installation of the train, which was built by Barrel Creations of Huntly, Aberdeenshire. The train travellers passing through or alighting at the station must be very impressed when seeing the train.

President Lyndon Heap said “This station project has been very successful and has attracted a great deal of interest within the community. I must not only thank club members and Friends of Rotary who turn up every Saturday morning, but also thank Brian Haworth of Community Rail Lancashire, Arriva Rail North, Graham West and Mark Lenton from ISS who all have contributed to the major improvements at the station.”