Network Rail engineers have agreed a plan to repair a 500,000-tonne land slip which has forced closure of part of the much-loved Settle to Carlisle railway line. 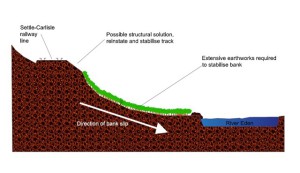 The repairs at Eden Brows, near Armathwaite, Cumbria, will involve building a structure underneath the affected section of railway to support it. The project, expected to take many months, will also involve major earthworks to stabilise the embankment. It is not clear at this stage precisely how long this work will take due to the scale of the slip, the fact the earth is still moving and the inaccessibility of its location.

Northern Rail customers, including UK and overseas tourists, are currently travelling on train services operating between Leeds and Appleby, which remains open for business, but on replacement bus services between Appleby and Carlisle.

The line between Appleby and Carlisle was closed on 9 February after Network Rail’s aerial and ground surveillance detected that a 130-metre-by-70-metre section of the Eden gorge embankment, below the railway and above the River Eden at Eden Brows near Armathwaite, was giving way.

To read the full media release click this link bit.ly/1T9RHz8