Work started on Monday 20th April at Rose Grove station to improve facilities in readiness for the commencement in May of the new Todmorden Curve service.

The works will last for an estimated 3 weeks and are an early scheme that forms part of the Burnley/Pendle Growth Corridor and have been agreed as an advance commitment in order that they are completed prior to the new Blackburn to Manchester rail service starting on 17th May, 2015.

The scope of works is as follows:

passenger security will be improved through the provision of CCTV; passenger operated help point and through the removal of the large trees in the planted areas on the platform to create a more open environment;

passenger information will be improved through the installation of CIS (Customer Information System);

passenger comfort will be enhanced through the provision of a new anti vandal waiting shelter and seating;

a TVM, ticket vending machine, will be installed in the shelter; and

other works include improved signage and information panels. 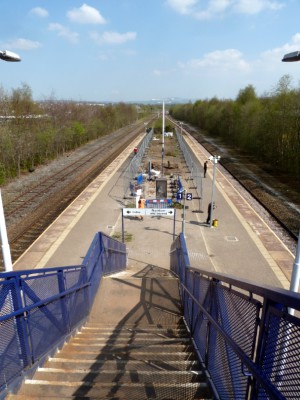 As can be seen from the photograph above the removal of the old shelter, clearance of the raised beds and installation of the CCTV is well under way.

The East Lancashire Community Rail Partnership (ELCRP) is working with local schools, including Padiham Green Primary school, to increase awareness of the new rail service, to teach them how to safely use the railway and to develop artwork for display at the station.  The project will be called ‘Rose Grove Revived’ and will be eligible for a grant from the Designated Line Community Rail Development Fund (DCRDF is supported by the DfT, Network Rail and the Association of Community Rail Partnerships).

In addition, a separate scheme is being developed through the Burnley/Pendle Growth Corridor to provide a car park and bus interchange for the station.

As a result of the new service and the works described above passenger footfall at the station is forecast to increase by 100% to nearly 100,000 passengers per annum.