The scheme which allows local communities to adopt under-used stations and rail lines is set to enter a new era under multi-million pound announced by the Rail Minister Paul Maynard today.

Nearly 60 community rail partnerships (CRPs) have been set up around the country since 1993, and have helped to revive and reshape more than 80 routes and station, thanks to volunteers, community engagement and funding from the government and train operators, which last year topped £3m.

And now the Department for Transport plans to build on the success of the scheme by launching an updated Community Rail Strategy – with millions of pounds of investment available for successful schemes. The plan id to see the scheme expanded and replicated on a wider scale across the country.

The most successful projects have seen passenger numbers boosted, while others have recreated railway stations as important community hubs. 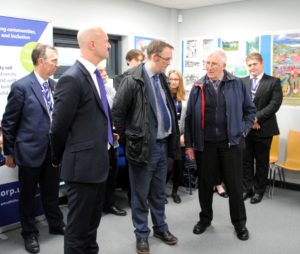 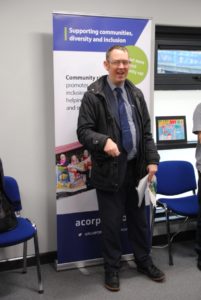 The minister said; “We have seen nearly a quarter of a century of communities pulling together to breathe new life into railway lines and stations – and we want to build on that success.”

He continued saying; “We want to give the volunteers the support they deserve, spread their success and encourage new partnerships to be created and flourish.”

And added: “This forms a key part of the investment the government is making in the railways – the biggest since the Victorian era, delivering new carriages, new routes, track upgrades and better stations.”

The minister was joined by Craig Harrop of Northern, Richard Watts from Community Rail Lancashire and Brian Barnsley from the Association of Community Rail Partnerships.

Craig said; “Northern are committed to our continuing support of community rail and thanked the CRPs and the host of volunteers who carry out work on Northern stations.”

Brian said; “I have been around since the launch of the original Community Rail Strategy and am delighted to be here to see the consultation launched for a rebooted strategy. ACoRP are encouraging as many people as possible to take part in the consultation and have produced a booklet to show ‘What has been achieved through Community Rail’.”

Richard added; “The original strategy was all about safeguarding rural lines but we are in a different place now with many community rail partnerships working on inter-urban routes as well as rural lines. The four objectives of the new strategy demonstrate that community rail has come along way since 2004.” 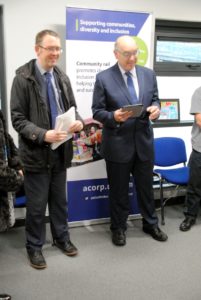 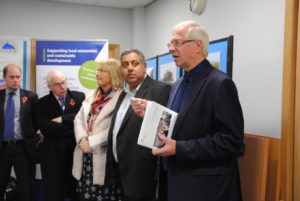 Jools Townsend, Chief executive of ACoRP, wants to encourage as many people to get involved as possible and says:

“Community rail is a burgeoning grassroots movement made up of hundreds of local groups and partnerships around Britain – and it plays an increasingly important role. These groups carry out vital, often unsung, work to ensure communities can get the most from their railways: promoting rail as a part of sustainable and healthy travel, breathing new life into stations and running a raft of volunteering and community engagement activities. Community rail is growing, with new partnerships and groups emerging all the time, and its importance to our railway’s development is increasingly recognised by industry and government. We need to ensure that community rail continues to be nurtured so it can play its part in bringing about a healthier, happier and more sustainable future. This consultation is a great opportunity for us to explore how community rail can continue to make a difference, and we’re encouraging anyone interested in sustainable travel and community development to get involved.”