Great North Rail Project resulting in space for an additional 40,000 people in Lancashire and across the north at peak times. 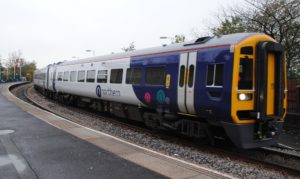 Landmark coming together sees train companies, Network Rail and suppliers launch ‘In Partnership for Britain’s Prosperity’ a single, long -term plan for a changing and improving railway. The plan sets out how Britain’s public and private ‘partnership railway’ will secure almost £85bn of extra economic benefits to the country and enable further improvements.

The plan will launch a new drive to show customers and communities locally how the railway is changing in their area including 6,400 extra services across the country – with space for an additional 40,000 people in Lancashire and across the North at peak times thanks to the Great North Rail Project. The plan is supported by business and passenger groups and makes four commitments for change to improve and deliver for the economy, customers, communities and staff working in rail.

The plan, ‘In Partnership for Britain’s Prosperity’, announced by the Rail Delivery Group (RDG) is backed by business and passenger groups, and sets out how Britain’s ‘partnership railway’ of the public and private sectors will secure almost £85bn of extra economic benefits to the country and enable further improvements. The Great North Rail Project, a team effort to transform train travel in the north of England by Network Rail, Northern, TransPennine Express, Transport for the North and DfT, is a key part of the rail industry’s plan, which also sets out four commitments to build on the railway’s progress of the last 20 years.

These include a commitment to boost local communities through investment including 6,400 extra services across the country. This will mean space for 40,000 extra people in Lancashire and across the north by 2022. With forecasts by the Centre for Economics and Business Research indicating 14,400 new jobs will be created in Manchester and 5,700 in Liverpool by 2022, the extra capacity will be vital to connecting more people to more employment opportunities.

The four commitments being made by Lancashire’s, and the nation’s rail companies together are:

+  Commitment 1 – Strengthen the railway’s contribution to the economy, keeping running costs in the black, freeing up taxpayers’ money;

+  Commitment 2 – Increase customer satisfaction by improving the railway to remain the top-rated major railway in Europe;

Securing the economic benefits of the public and private partnership will mean that:

+  In the next 18 months alone, customers and communities across the country will see a transformation in their railway with more trains, better services and improved stations;

+  Customer journeys will be improved using technology to increase capacity by running trains closer together, to improve information to help passengers during disruption, and to make buying and using tickets quicker and easier;

+  Improved services and greater confidence for customers with the introduction of a new Independent Railway Ombudsman, by summer 2018, ruling on unresolved complaints.

+  A stronger voice for customers in England and Wales with customer representation on joint supervisory boards, or an equivalent – a partnership between the rail industry and customer groups; and

+  Our staff in the railway will benefit with 100,000 job opportunities, £1bn investment in our team, the creation of 20,000 new apprenticeships in rail and its supply chain by 2020 and doubling the number of higher level apprenticeships every five years.

David Brown, Managing Director at Northern commented: “The railway is key to Lancashire’s long-term prosperity.  As our industry comes together with a single plan to drive change, we are investing to improve what matters most to our customers and the regional economy.  We will deliver more capacity, improved services, faster journeys and a better customer experience that will better connect northerners with jobs, social and leisure opportunities.”

Leo Goodwin, Managing Director for TransPennnine Express said: “We are committed to the communities we serve and over the next three years, will deliver an investment of over £500 million which will transform rail services across the North and into Scotland.”

“This investment includes the introduction of 220 brand new carriages which will provide an additional 13 million seats per year for customers. This will lead to an 80 per cent rise in seats at the busiest times of day.”

Martin Frobisher, Managing Director for Network Rail’s London North Western route, said: “By working as one team the rail industry is transforming train travel for customers in the north of England, including in Lancashire where our Chorley-Preston-Blackpool line upgrade, part of the Great North Rail Project, will bring lasting benefits.”

Chris Hearld, KPMG’s North Region Chair said: “Northern’s plans to modernise our region’s existing railway are widely welcomed by the business community and will bring vital economic benefits with more services linking towns and cities and new trains hopefully attracting more passengers. They are changes I know many across the North are pleased to see become reality.” –

Alan Welsh, Policy Manager at North and Western Lancashire Chamber of Commerce said: “As our roads become ever more congested, the rail network has an increasingly vital role to play in keeping people and goods moving.  We fully support Northern’s modernisation programme and their efforts to deliver more reliable services, greater freedom of choice and better journeys for customers.  Improved rail connectivity between towns and cities in the North will encourage further investment and boost employment prospects, both fundamental to achieving a true Northern Powerhouse economy.”

Richard Watts, Chair, Community Rail Lancashire Ltd said: “The rail network provides vital links from the communities of Lancashire into the regional centres of Manchester, Liverpool, Leeds and Preston. The investment led changes across the north will see new and refurbished trains, improved stations, more services and electrification. Yet central to all of this is the role of the community and often the locally based community rail partnership (CRP). Considerable investment in local rail services is the result of the vision and enthusiasm of local communities supported by their local authority and CRP.  The extended Darwen Loop and reinstated Todmorden Curve have been the harbingers of new or improved services providing better links to the regional centre of Manchester.  The rail industry has never been closer to the communities it serves and this partnership will provide a firm base for yet more exciting developments”.

You can read In Partnership for Britain’s Prosperity document here.

You can find the official RDG Press Release here.