The Association of Transport Co-ordinating Officers (ATCO) has just published a guide to the railway for Local Authorities. It is hoped that the guide will local government a better understanding of rail transport. 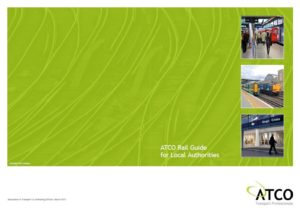 One of the areas covered by the guide is Community Rail and it goes on to say:

The community rail movement has made a significant and telling contribution to the success of many rural and local lines across the country, since its inception in the mid-1990s. The principle is that the closer involvement of local communities, organisations and local authorities in the development of local lines will help to stimulate both growth in patronage and support for the local economy.

Following early successes in the North of England, the West Country and East Anglia, a national organisation (the Association of Community Rail Partnerships – ACoRP – www.acorp.uk.com) was formed to promote good practice and to stimulate research into the benefits of such an approach. In 2004, the then Strategic Rail Authority took the lead by publishing a Strategy for Community Rail and instigating a number of pilot projects across the country, designed to demonstrate what community rail could achieve. This work continues to be led by the DfT’s Community Rail Team, in conjunction with ACoRP.

DfT has also provided further impetus to the movement by introducing the designation of community rail lines or services, which entitles those so designated to additional support and potential for funding.

There are now over 50 community rail partnerships covering a wide variety of lines across England, Wales and Scotland. Full details of these can be found on the ACoRP website. The format of a CRP can be flexible – many have their origins in local authority sponsored and funded projects, and continue to be managed by CRP Managers employed by local authorities. Others have adopted a more independent approach, for example as community interest companies run by management boards of local representatives.

Whatever the structure adopted, these organisations have come to be particularly adept at generating significant additional benefits to the lines they support with minimal resources. Funding continues to be an issue, but enthusiasm and commitment are not!

As with any community based activity, the input of volunteers is critical. Many TOCs and CRPs now operate Station Adoption schemes, in which volunteers are encouraged to work within certain guidelines to ‘adopt’ and support their local station. Adoption takes many forms, from tending the station garden to holding promotional events to encourage use of the service, but the outcome is generally very positive for the line and a great source of satisfaction to the volunteer.

From the local authority perspective, many of the projects that CRPs undertake have relevance to a wide range of strategies and programmes that the authority may already have a commitment to – not just transport, but often environmental, tourism related, educational or supporting the local economy. The challenge is therefore to find common ground that allows all parties to make best use of the funding and resources available.

A full copy of the guide can be downloaded here: ATCO Rail Guide for Local Authorities.