Tuesday 12th February 2019 saw a dedication service to unveil a new memorial plaque to remember the part that the Queen Mary’s Military Hospital, Whalley, played in the First World War. 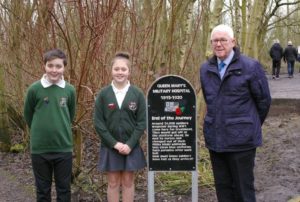 The ceremony was held at the Fell View entrance to the Whalley Woodlands, close to what was the site of Calderstones Hospital. The dedication service wa sled by Rev Jonathan Carmyllie and attended by the Mayor, Cllr Joyce, the head teacher from Barrow Primary School (along with the head boy and head girl0, the Chair 7 secretary of the Friends of Whalley Woodlands and local artist Alastair Nicholson, who designed the plaque. Also in attendance were many of the volunteers that help to look after the woodlands.

The Chair & Secretary of the friends group gave a little background to the project and Alastair, the artist, thanked WEC Engineering in Darwen, the Making Rooms, in Blackburn and Community Rail Lancashire for helping to make the plaque possible.

The Queen Mary’s Military Hospital was in operation between 1915 and 1920 and around 50,000 soldiers wounded during World War 1 were transported to the hospital by hospital train via Clitheroe and a direct branch into the site.