The Preston to Blackpool railway is to reopen following the major upgrade works. Monday 16th April will see the line reopen with initially and hourly service between Preston & Blackpool North. 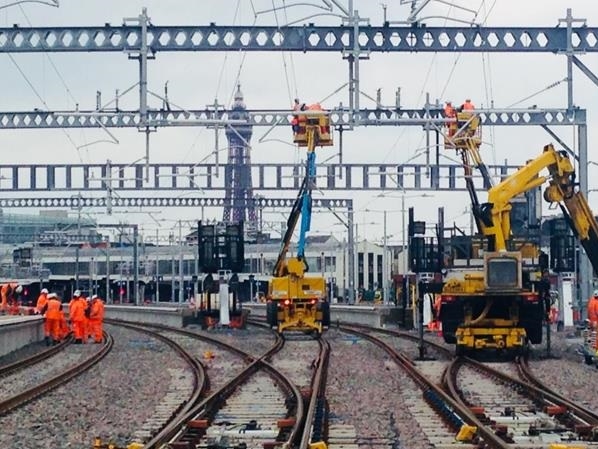 As part of the multi-billion pound Great North Rail Project, the line will reopen following 22 weeks of work to upgrade the tracks, station platforms and signalling system. Train services between Preston and Blackpool North will resume from Monday 16 April 2018 initially with one train per hour allowing time for driver training on the route.

Also on Monday 16 April, Virgin Trains on the west coast will reinstate its direct service to Blackpool North, which departs London Euston at 16.33.

The closure of the line was extended in March to complete the route upgrade following severe weather and the breakdown of critical machinery used to install new overhead line equipment.

Martin Frobisher, route managing director for Network Rail’s London North Western route, said: “During the closure we’ve worked round-the-clock to upgrade and electrify the line to provide passengers with better services on this important route later this year. This work will allow greener, quieter and more reliable train services to run between Preston and Blackpool North when the new timetable is introduced on 20 May 2018.”

Sharon Keith, Northern Regional Director, said: “We’re delighted to be able to once again start running trains between Blackpool North and Preston. The electrification work, carried out as part of the Great North Rail Project, will enable us to run greener and more reliable electric trains from Blackpool as part of our May timetable change, giving our customers more comfortable journeys and more journey options. On Monday 16 April we will introduce an hourly service on the route while we carry out essential driver training in preparation for the May timetable changes. I am asking our customers to plan their journeys carefully when travelling to and from Blackpool. Timetables from Blackpool North will be updated as more services are introduced, whilst a full rail service will continue to operate from Blackpool South.”

Michael Stewart, General Manager at Virgin Trains on the west coast, said: “At Virgin Trains we’re pleased to be returning to Blackpool with our northbound service from London Euston to Blackpool North. We would like to thank customers for their patience and understanding, whilst Network Rail have worked to electrify the line between Blackpool and Preston as part of the Great Rail North Project.”

When the railway reopens, upgrade work will continue into spring during overnight shifts when trains aren’t running.

Passengers should keep checking northernrailway.co.uk or nationalrail.co.uk for the latest travel information.