It is only fitting that in within a week of the final Pacer running on the Northern network (see previous news item communityraillancashire.co.uk/news/northern-bids-final-farewell-to-pacers/), we announce the winners of the Lancashire Triangle Pacer Photographic Competition.

The competition, hosted by Community Rail Lancashire took quite a while to judge but the organisers asked Martin Keating, Northern’s Regional Community & Sustainability Manager (West) to participate in the final selection as our two judges Barrie Russell (Competition Organiser), Tony Ford (Chair of the South Fylde Line Community Rail Partnership) could not agree on the winners.

There were some delightful and atmospheric shots which typified the manner in which the Pacers worked through the triangle in all kinds of weather and in all kinds of circumstances. We don’t think that any passenger train has had such an effect on drivers, conductors, passengers, train enthusiasts and train operators as the Pacer has during the period from 1985 – 2020. Thankfully, they live on as libraries, running services on preserved lines and of course in the National Railway Museum.

As the route involves three distinct lines, the competition was split into three sections.

In the South Fylde section (Preston to Blackpool South) of the triangle, Paul Nettleton from Blackpool took the honours with his bright blue-sky photo of a Pacer with its cheerful conductor at Squires Gate. 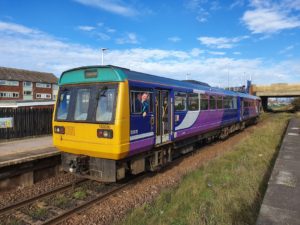 142020 calls at Squires Gate station on its way to Blackpool South. This was one of the last Pacer units to be seen on the South Fylde line – Paul Nettleton

The winner of the East Lancashire section of the triangle (Preston to Colne) was Kev Hall capturing a Pacer drawing into Church & Oswaldtwistle station. 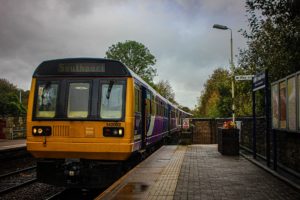 The third section of the triangle is the West of Lancashire (Preston to Ormskirk) which was won by Martyn Hilbert for his evocative image of a Pacer travelling through one of the many rural locations and crossing the River Douglas on its way to Rufford. 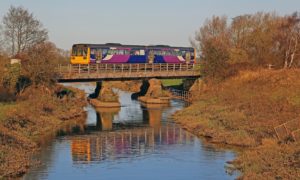 142046 crosses the River Douglas on the approach to Rufford on an 11:26 Preston to Ormskirk service – Martyn Hilbert

Every winner receives their image transformed into a unique 1000-piece jigsaw. We will be contacting the winners shortly to try and arrange photographed handovers to award their prizes, though being in the latest Covid Tier 3 this may prove to be quite challenging.