Network Rail is delighted to announce the vital work to transform train travel in the north has completed on time and is thanking passengers and the local community for their patience.

Between Sunday 18 December 2016 and Monday 2 January 2017 around 700 orange army engineers worked on the longest and most complex stage of the project to build the Ordsall Chord. 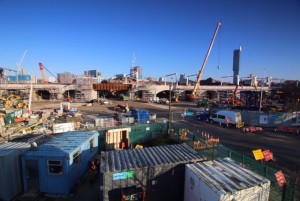 The Chord, which includes a 300-metre section of new track, will open up new direct routes to Manchester Airport from across the north and ease congestion, creating space for more trains to run. It will also link Manchester’s Piccadilly, Oxford Road and Victoria stations.

During this time 250km of new signalling cables have been commissioned – completing one of the most complicated signalling jobs of the last 40 years in the north west.

The workforce worked around the clock to install:

+  8 new sets of switches and crossings

Martin Frobisher, route managing director for Network Rail said: “The benefits of the Ordsall Chord will be felt for generations by customers as far off as Newcastle, Hull, Liverpool and countless other great towns and cities in the north.

“The far-reaching vision of this railway upgrade in central Manchester reflects and builds on that showed by the Victorians in the early 1800s when they built the railway we are now seeking to maintain and improve.”

He added: “I would like to thank train passengers for their understanding over the festive period. I would also remind everyone that the short-term pain of disruption to journeys will be worth the long-term gain the Ordsall Chord will bring.”

The Ordsall Chord is part of Network Rail’s +£1bn Rail Upgrade Plan to ensure passengers in the north can access more frequent trains and travel to their destination faster.

Liam Sumpter, Regional Director for Northern, said: “The Ordsall Chord is a vital component of the modernisation of the rail in the north of England and it’s incredible to see so much progress on the work during Christmas.”

“I’d also like to thank our customers for their patience during the past few weeks, and can assure them that this vital work is paving the way for improved and more frequent services in the years to come.”

“The work on the Ordsall Chord – and other projects across the region – goes hand in hand with Northern’s own modernisation programme which will see significant improvements to stations, carriages and services and will deliver a rail network fit for the 21st Century.”

Kathryn O’Brien, Customer Experience Director for TransPennine Express said: “Firstly, I want to thank customers whose journeys were affected by the work over Christmas for their patience and understanding.”

“The Ordsall Chord is an important part of improving Manchester’s railway and connectivity across the North and will allowing us to introduce more journey opportunities, frequent services and brand new trains.”

Councillor Andrew Fender, Chair of the TfGM Committee said: “I am absolutely delighted that the recent enhancement works in and around Manchester City Centre have been completed on time and normal services are now operating. The Ordsall Chord will transform rail services in Greater Manchester and will provide passengers with more journey choices and destinations and a more reliable railway. The engineering works were both significant and very complex and I want to applaud all those involved for not only delivering on the plan but for keeping passengers informed and providing alternative travel options. I want to also thank passengers for their patience and understanding over the festive period.”

During the 15-day period, existing railway track between Eccles and Deansgate, Eccles and Manchester Victoria and Deansgate and Salford Crescent stations was reconfigured. These changes will allow the chord to connect with the new track layout before work is completed by December 2017.

Other work over the period included: Two new bridges installed, Water Street Bridge renovated, Castlefield viaduct widened, the Ordsall Lane track layout modernised, signalling improved and new overhead line equipment built.Heritage also plays a key part in the project and last year Grade I listed structure George Stephenson’s Bridge was freed from a metal structure which had covered the bridge since the 1860s.  Now it can be seen by members of the public and the painstaking task of rejuvenating the bridge to how it first looked in 1830 continues.

Due to the size and scale of this essential work, there were necessary changes to train services during this period.  However, normal service has now resumed for passengers.

Heritage also plays a key part in the project and last year Grade I listed structure George Stephenson’s Bridge was freed from a metal structure which had covered the bridge since the 1860s.  Now it can be seen by members of the public and the painstaking task of rejuvenating the bridge to how it first looked in 1830 continues

A time-lapse video of the works over the Christmas period can be viewed on Youtube by clicking this link; https://www.youtube.com/watch?v=016WffI8pE0