A project being developed by a group of Arriva Rail North (Northern) apprentices working with Community Rail Lancashire has just been given the green light with a grant of £5000 from the Community Rail Development Fund. 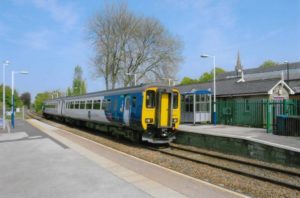 The project aims to enhance the station by improving it aesthetically, and this will include re-designing the station signage to allow for full accessibility. The group also hope to use the station to promote tourism, and increase awareness of the local area and its history. Through these initiatives they aim to increase the station’s footfall and also to involve the local community more closely with their station.

There are three main areas of work withing the project:

Working with two Clitheroe primary schools and a local artist we plan to create a display which features some of the important historical events which have taken place in Clitheroe and which showcases how Clitheroe and its inhabitants have progressed and developed throughout the years i.e. with new innovations and industry.

Having taken inspiration from last year’s Northern Apprentices’ work at Blackburn, we would like to implement similar changes to the signage at Clitheroe in order to create a more accessible station for those who may struggle with the signage currently in place, or lack thereof. The signs will be dementia friendly.

In addition to the new and improved accessible signage, we would like to incorporate a printed map of Clitheroe which would feature such landmarks as the railway station and the castle, as well as certain other locations such as local businesses who would be willing to sponsor a place on the map.

Inspiration for this comes partly from the 3D maps located at York railway station which allow for more accessibility by creating a clearer understanding of the layout of the station. Initially this was our plan, however, upon receiving a quote for this we came to the conclusion that flat, wall mounted maps, printed onto the weather proof Di-Bond material would be a more cost effective alternative.

The Community Rail Development Fund (CRDF) is a joint initiative of the Department for Transport (DfT) and the Association of Community Rail Partnerships (ACoRP).