The group have spent time planning their project ideas alongside the other team members existing plans. On Monday they were introduced to Rail Minister Paul Maynard when he was at Burnley Manchester Road station launching the Community Rail Strategy Consultation.

The apprentices have been concentrating on two Northern stations for their projects and have visited both Bingley and Blackburn during the week. On Thursday the apprentices along with members of CRL staff were hosted by the Bentham Line CRP at their headquarters on Bentham station to get further ideas for developing their project ideas. 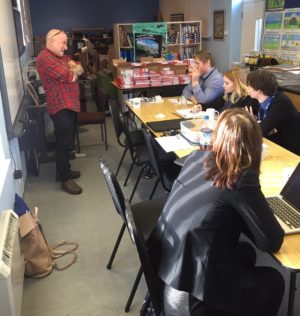 The apprentices are introduced to Gerald, Chair of the Bentham Line CRP

The apprentices will be coming back to visit Community Rail Lancashire roughly once a month over the next year as part of their ongoing programme.