Community Rail Lancashire’s educational programme has been enhanced with a trial run of a joint initiative with Virgin Trains West Coast at Preston.

As part of the new ‘Down the Line’ project Community Rail Lancashire’s educational team and staff from Virgin Trains West Coast visited West End Primary School in Ormskirk. The school has agreed to take part in a trial which will see two classes of children travel by train from Ormskirk to Preston courtesy of Northern and take part in a series of activities with staff from CRL, VTWC and the British Transport Police at the station.

The first class visited last Friday 1st April and the day was declared “brilliant!” by the children. The second class are due to travel to Preston today after which the trial will be evaluated and hopefully moved forward to encompass more West Lancashire and South Fylde schools. 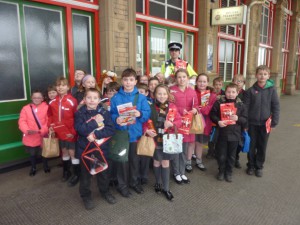