Morecambe Bloomers, the Community Station Adopters at Morecambe station have been working hard, with the support of Morecambe Town Council, to bring fresh colour to the station and create a positive first impression, to this traditional seaside town on the Lancashire coast, for all those arriving by train.

Over the past two years they have created floral displays on the main platform, in four large timber planters they constructed themselves. They have recently added several planting troughs atop the railings close to the platform entrance.

During 2017 they commissioned three large pieces of artwork following a successful bid, supported by the Leeds-Morecambe Community Rail Partnership, (The Bentham Line), to the Station Adoption Fund established by Northern. the train operating company.

Outside, on the boundary fence, two multi-panelled murals have been installed, with the assistance of Network Rail and inside the main waiting room a new montage of Morecambe has been created by local graphic designer, Hannah Holmes. The first of the vibrant outside murals, which echoes pieces elsewhere in Morecambe, is based on an art-deco theme and offers a warm welcome to the town. The second is a colourful reflection on the seaside.

Tuesday, 27th May 2018 saw the formal unveiling of the enhancements at the station. Abigail Fawcett, Assistant Clerk to Morecambe Town Council welcomed all the guests, including the Morecambe Bloomers, representatives of local councils, Arriva Rail North (Northern), Network Rail and the Community Rail Partnership. 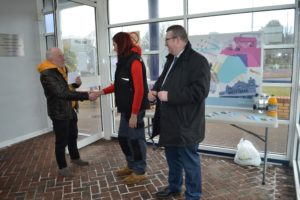 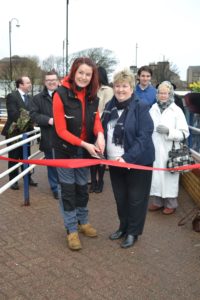 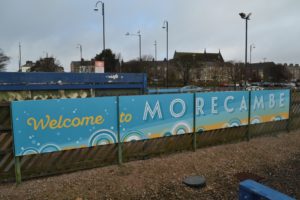 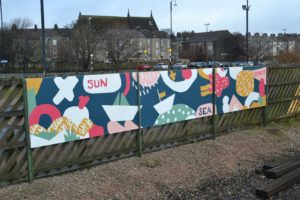 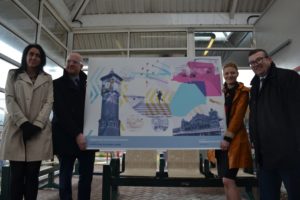 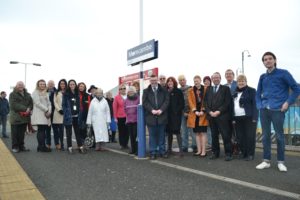 Councillor Janice Hanson, Vice Chair of Morecambe Town Council, congratulated all those involved in the projects at the station and in creating a colourful gateway to the town which gives a positive first impression. She also thanked those from the rail industry, the Partnership, and Town Council staff for their support for the group and their help in bringing the projects to fruition. Together with Louise Clague, Chair of Morecambe Bloomers, she then cut a ribbon to mark the launch of the enhancements.

Martin Keating, Community and Sustainability Manager with Northern, warmly thanked the Bloomers for all their hard work over the past two years in bringing a new lease of life and colour to the station environment. He added that Northern had been pleased to support their ideas and encouraged them to make further applications to the Station Adoption Fund.

Gerald Townson, Chairman of the Community Rail Partnership, added his congratulations to all involved in the projects, praised the community involvement and wished the group continued success with their endeavours. Gerald added that enhancements, such as these, played a positive role in supporting the Partnership’s challenge for the Bentham Line of working towards becoming the first dementia friendly railway line in the United Kingdom. Rounding off the formal element of the event with a surprise gift for the Bloomers, Gerald presented Louise, the Chair of Morecambe Bloomers, with a cheque for £300 from the Partnership, to use towards their future voluntary work at the station.