On Thursday 20 May 2021, the keenly awaited Government White Paper, the Williams-Shapps Plan for Rail, was released.  This proposes a wide range of developments to reinvigorate the rail industry, including a new overarching body, Great British Railways, and encouragingly states that ‘community rail partnerships will be empowered to strengthen rail’s social and economic impact’.  The pioneering work on dementia awareness and the railway by the Leeds-Morecambe Community Rail Partnership came in for special mention. 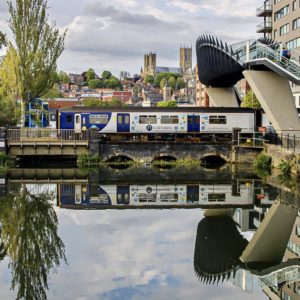 To quote the plan; ‘Best practice, such as that demonstrated by the work of the Leeds-Morecambe Community Rail Partnership with Northern Trains to improve facilities for those with invisible disabilities and training staff and volunteers as Dementia Friends, will be supported more widely across the network and incentivised within Passenger Service Contracts.’ (Williams-Shapps Plan for Rail, page 46.) 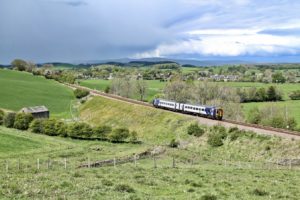 Gerald Townson, Chairman of the LMCRP said;  “we are delighted at this recognition of our ground-breaking work, alongside Northern, in creating Britain’s first dementia-friendly railway, on the Bentham Line.  We are greatly encouraged by the Plan’s promotion of inclusivity and commitment to support and develop this initiative.  The LMCRP welcomes the publication and looks forward to a positive future role for all CRPs. It is particularly pleasing that the publication coincides with Dementia Action Week 2021, as our roving ambassador, unit 150 214 bedecked in forget-me-nots, continues its travels around the Northern Network.

Pete Myers, Stakeholder Manager for Northern Railways East Area, who has given a great deal of help and support to the project, commented; “The Government does not tend to identify outside organisations in papers as important as the Williams – Shapps Review.  Therefore, it is a real credit to the Bentham Line’s CRP that they have received this direct mention. Something they clearly deserve, as the work they have undertaken to make the Bentham Line dementia friendly is nothing short of awe inspiring, and I for one, and also on behalf of NorthernTrains, am immensely proud to have played a small part in it.”

Rod Tickner, the  Vice Chairman of LMCRP and a co-founder of Dementia Friendly Keighley, added;  “at our train naming ceremony two years ago our colleagues at Northern Trains were expressing the hope that our work on creating a dementia-friendly railway would become ‘a beacon for other railways’ and be rolled out across the entire rail network. Today that aspiration moves a step nearer to reality. “

Jools Townsend, CEO of the Community Rail Network, commented; ‘Through work like that of the LMCRP, it’s plain to see how vital our railways are to community life – but they have an even greater role to play going forward’.

Top – Northern unit 150214 at Lincoln. The Bentham Line’ unit bedecked in dementia awareness forget-me-nots, crossing the River Witham in Lincoln on 19th May 2021, heading for Sheffield during the unit’s travels across the Northern Network for Dementia Action Week. Photograph courtesy of Shane Cox.

Bottom – Gargrave. The Bentham Line has a host of positive experiences to offer those living with dementia and their carers, from spectacular scenery to a day by the seaside. One of the regular services, seen here near Gargrave. Photogrpah courtesy of Charlie Rouse.