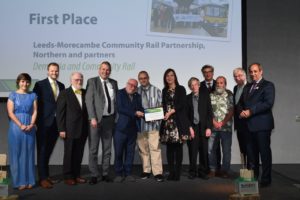 The CRP team and partners receiving the award at Telford

The event was hosted by Jools Townsend, Chief  Executive of ACoRP (Association of Community Rail Partnerships) who, in her comments introducing the award, said: “Our judges were bowled over by the winning project. They described it as an exemplary, ground-breaking project. Developed over several years, it tackles an issue of growing importance, in a sensitive, positive and empowering way, increasing opportunities for many people who are likely to otherwise be increasingly isolated.  This is an inspirational project which has the potential to increase support and understanding towards some of the most vulnerable members of the community. It has not only delivered demonstrable impact for people living with dementia and their carers, but it has put their perspectives centre-stage, helping them to have a voice.  The judges believe this project should be rolled out across our railways.”

Gerald Townson, chair of the Bentham Line stated: “What an amazing time we had on Thursday at the Community Rail Awards 2019.  We were delighted to receive first place in the ‘Influencing Positive Change’ category with our ‘Dementia and Community Rail’ project. I am overwhelmed by the praise and recognition for the partnership. It is gratifying that several years work by a resourceful and dedicated team of individuals has resulted in receiving this award. I am particularly pleased that it was stated the project should be rolled out nationally.”

Rod Tickner, a co-founder of Dementia Friendly Keighley and vice chair of the partnership said  the support of other organisations has been invaluable including the Alzheimer’s society, Forest of Bowland AONB, North Yorks County Council and  ACoRP, as well as the continuing support from the rail industry.  We are also linking up various dementia-friendly initiatives along the line from Leeds, Shipley, Keighley, Skipton, Bentham, Morecambe and Lancaster creating a 75-mile-long dementia-friendly corridor. By this we are hopefully encouraging and helping the communities to develop and share ideas and best practice.”

Martin Gardiner, a Bentham resident and volunteer at Bentham station who has helped with the project making a visual display for the platform promoting dementia awareness, was looking forward to the awards evening as the group from Bentham travelled to Telford and said: “I feel so privileged to be part of the Bentham Line family”,  whilst his reaction to the partnership’s success was: “none of this wouldn’t have been possible if it wasn’t for the good man called Gerald and his colleagues, who have done a lot for our line and the community and I am very proud of being part of this family.”

Peter Wilkinson, Managing Director of Passenger Services at the Department for Transport in London, in his guest speech at the start of the evening referred to “original and innovative work on the Bentham Line.” Earlier in the year he had commented on the warm welcome he had received at Bentham when unveiling a some artwork which had been created by local residents affected by dementia.

Ian Davis of ACoRP added: “This is a wonderful collaboration between the Bentham Line and its partners.  ACoRP is delighted to support this major project which creates an increased awareness of dementia and promotes inclusivity on the railway and in the communities on the route. I am looking forward to this extremely important initiative to expanding beyond the Bentham Line.”

Congratulations to ‘Action Stations – Bingley and Crossflatts’ for receiving Leading Silver Station award in the ‘It’s Your Station’ category and to Lancaster & District Conservation Volunteers for their shortlisting in the ‘Most Enhanced Station Buildings and Surroundings’ category.

The Bentham Line would like to say, “Well done”, to every group and individual who were shortlisted and to all those who received an award.”