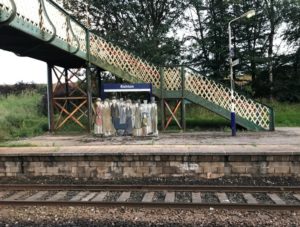 A local artist, Ursula Hurst has been working with 180 pupils from the three primary schools in Rishton, St Charles’ RC Primary; St Peter and St Paul’s CofE and Rishton Methodist School to introduce them to Wakes Weeks. The pupils have been learning the history of the local textile mills and how they were shut down for at least a week for the mill workers to have a holiday normally in Blackpool. Hence the title of the project ‘From the Mills to the Tower’!

Apart from learning about the history of their community the pupils were asked to develop artwork that could be displayed at the station to show the mill workers waiting to catch the special trains that took them to Blackpool. The pupils produced sketches of the people waiting in their different clothes with lots of bags and excited faces. These have been used to design full sized figures that are being developed and will stand on both platforms attached to the Rishton running in boards.

After looking at old photographs many pupils noticed how smoky the town looked due to the mills. This led to them creating paintings of the smoke-filled skyline which the artist has used as the inspiration for a long backdrop that will be fixed to the palisade fencing to the rear of the Blackburn platform at the station.

Finally, the pupils were asked to think about the positive aspects of Rishton today. After looking at old vintage posters of other towns they noticed there were none for Rishton! So, with the help of the artist, they have created their own posters. The result is three vintage style posters that will be displayed on the Accrington platform celebrating all that is good about Rishton along with a map of Rishton today.

It is also worth noting that the Rishton Prospects Panel, who have adopted the station, initiated this project to celebrate 20 years of voluntary environmental work at the station and around the village through a major community art project at the station.

The Community Rail Development Fund is a pot of money provided by the Department of Transport and managed by the Association of Community Rail Partnerships and helps by providing funding for projects on community rail lines across the country.