Sunday 20th May 2018 sees significant changes to the rail timetables in the Community Rail Lancashire area. 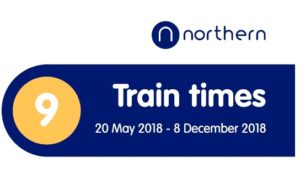 The new timetable will now allow for a normal commute to Leeds along the route with an arrival time in Leeds of  08:43 and departures from Leeds at 17:25 & 19:18 (Mon to Sat). Additionally there will be two later evening services form Morecambe & Lancaster (Mon to Sat).

From 20th May 2018 services from Clitheroe & Blackburn (direct) will be extended to run through to Rochdale (Mon to Sat). On Sundays the trains will continue to terminate at Manchester Victoria.

On the return journey from Blackpool South (every day incl. Sun) trains will run through to Colne via Preston.

On the return journey from Blackpool South (every day incl. Sun) trains will run through to Colne via Preston.

From 20th May 2018 journey times on the route from Blackburn to Manchester Victoria via Burnley & Todmorden will improve (Mon to Sat) with customers from Burnley able to reach Manchester in just 46 minutes and in 57 minutes from Accrington.

For the majority of the day (Mon to Sat) services will not call at Castleton, Mills Hill & Moston and these station will be served by the extended Clitheroe Line services (see above).

From 20th May 2018 the majority of services from Southport will arrive in Manchester at Victoria station with most carrying on forward via Todmorden to Blackburn. Two morning and evening peak services will serve Manchester Piccadilly.

From 21st May 2018 (no Sunday Service) Northern are introducing an hourly service on the route. Trains from Colne are terminating at Preston and the unit will then form the service to Ormskirk.

On the return journey from Ormskirk the service will run through to Blackpool South via Preston.

No significant changes and no Sunday service.

Blackburn to Manchester & Salford (via Burnley)

Southport to Manchester & Wigan to Kirkby