Following on from the investment in new rail stations in Accrington and Burnley and the reopening of the Todmorden Curve that has allowed a direct train service to Manchester from East Lancashire, it has just been announced that Blackburn is to get a brand new train depot.

The scheme is expected bring up to 40 new jobs with the depot being built on the derelict site of disused coal sidings at ‘The Wrangling’ between the existing track, Sumner Street, Duckworth Street, and Brunswick Street. The stabling, maintenance and cleaning centre will include an office block and new connection to the existing Bolton junction where the tracks to Preston and Darwen divide. 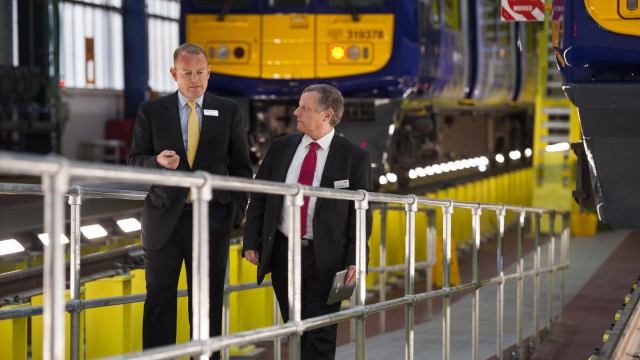 It will include a new railway bridge over Galligreaves Street and is likely to cost in excess of £10million in total. The project is linked to the £20million upgrade of the line from Clitheroe and Blackburn through Darwen and Bolton to Manchester paving the way for half-hourly services throughout the day from next year.

It follows in the footsteps of a year-long £23million project to provide a similar but larger new depot for 100 electrified trains at Allerton in Liverpool which opened in October.

Hyndburn MP Graham Jones said he hoped it would encourage new plans to be brought forward to upgrade the East Lancashire line between Preston. Blackburn, Accrington, Burnley and Colne.

Cllr Riley said: “This is welcome investment in an area of Blackburn in need in of regeneration, it should bring dozens of skilled new jobs of the sort the borough needs and re-establish Blackburn’s historic position as a railway hub.” He went on: “It fits perfectly with the major improvements to the line from Manchester to Clitheroe.”

Cllr Khan said: “I am very pleased at this development, it will provide welcome investment, security and jobs to an area of my ward that needs it.”

The new project on The Wrangling, provisionally known as the ‘King Street Depot’, involves:

+  the reinstatement of a previously-removed rail connection to the mainline operational railway;
+  the laying of new tracks extending into the site;
+  a new six-track trains stabling and maintenance building with carriage wash facilities;
+  an office accommodation building;
+  a controlled emission transfer toilet emptying system, plant room and water tanks; and
+  parking for six cars, a bike shelter and provision for motorcycle parking.

The existing bridge carrying disused railway tracks over Galligreaves Street is to be reconstructed and replaced with a new concrete structure. A spokesman on behalf of Network Rail and Northern said: “Plans have been submitted for a new train depot in Blackburn which will support wider improvements across the North West to provide passengers with better, more reliable railway.” “We are expecting an outcome in August and will be able to provide further detail once this decision is known.”

Railway sources confirmed that the new depot would involve a ‘significant investment’ of several million pounds by the two companies.

Northern Rail is due to phase out 30-year-old Pacer train by the end of 2019 and replace them with modern rolling stock which the new depot will be designed to look after.

Hyndburn MP Graham Jones said: “The whole of the rail system in East Lancashire needs investment and improvement in its link to the rest of the Northern region.” “This new depot is a welcome step in the right direction.  “It will hopefully bring the long-overdue improvement of the East Lancashire line from Preston through Blackburn, Accrington, and Burnley to Colne a step closer, including a link over the Pennines to Yorkshire and the East of England.”