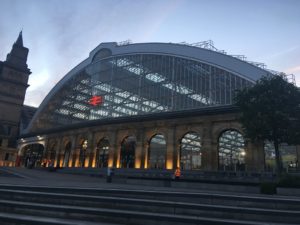 The Lime Street station upgrade is part of the Great North Rail Project, a rail industry team effort to transform rail travel for customers in future, through track and train improvements across the North.

“This vital upgrade is part of £340m of improvements across the Liverpool City Region and sits within the wider Great North Rail Project. This work will bring significant improvements for train customers for generations to come.

“I’d like to say a big thank you to all passengers for bearing with us while we deliver these much-needed railway upgrades.”

The station reopened on time, with the most noticeable change for passengers being to the platforms. All station platforms have been remodelled and many lengthened and widened to create vital space for longer trains and more passengers. Two new platforms, built last year, have also been commissioned.

In addition to this, just under 3km of track has been upgraded and the track layout completely remodelled to enable more services to run in and out of the station, more reliably.

The station’s eight week transformation this summer is the second major phase of its upgrade, the first taking place in autumn last year.

“Passengers are at the very heart of every decision we make and this is just one part of a huge investment across the north. This includes £3bn on the Transpennine upgrade, all Northern and TransPennine Express trains being replaced or refurbished, more than £1bn in improvements on other parts of the northern network and up to £780m investment on the East Coast Main line.”

“This is only the start of the ambitions we have set out in the Long Term Rail Strategy, helping to get the city region moving more efficiently and drive increased growth and investment in the area.

“We really appreciate the patience shown by passengers over the last eight weeks and I’m sure they will be pleased by the improved and increased number of services that these upgrades will bring.”

Chris Nutton, Major Projects Director at TransPennine Express, said: “The completion of this major milestone is great news for customers and I want to thank those affected for their patience over the last eight weeks.

“This crucial work will mean we can operate longer trains with more seats with the first of our brand new Nova trains set to start serving customers in Liverpool later this year.”

Andy Heath, managing director of Merseyrail said: “We have been pleased to support this important expansion project by bringing mainline passengers in to the city centre via Liverpool South Parkway station. Transport improvements like the Lime Street upgrade and our new fleet of trains, which will arrive on the network in 2020 and carry 50% more passengers, are vital to support growth in the region and ensure we can meet the demand on services.

“I’d like to thank our staff at Liverpool South Parkway and Central for their efforts to keep passengers moving, and thank our regular passengers who have accommodated some timetable changes recently to allow us to support the project with a shuttle service in to the city centre.”

Some additional, final works will take place on Sunday 2 September and Sunday 14 October before full project completion, which will see new platforms 1 and 2 come into full passenger use.  These upgrades will enable an extra three services per hour in and out of Lime Street station, including new direct services to Scotland.