Kulvinder Bassi, Community Rail Team Leader in the Department for Transport has won the Diversity and Inclusion Award at the 2017 Civil Service Awards. 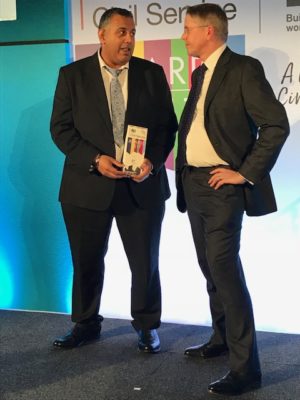 Kul Bassi on stage with Sir Jeremy Heywood, Head of the Civil Service

Lancaster House, London was the venue for the annual Civil Service Awards and Kulvinder was selected from the seven nominees to receive this prestigious award.

Kul Bassi’s energy is awe-inspiring, his networking skills are the stuff of legend and he makes a tangible difference to the way people feel about working in DfT. These skills have been honed over 20 years of leading DfT’s Positive Support Group. Kul is an inspiring leader, growing the membership of his network to nearly 80% of BAME people in DfT and working with his executive to build a programme of initiatives supporting members’ career aspirations and raising cultural awareness. The tone and direction of his network has influenced the way we do business with all our networks and is the model for new and emerging ones.