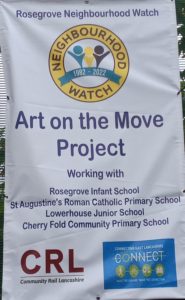 After approval of the minutes from the last meeting and matters arising Richard Watts, Chair of CRL and Secretary of the two CRPs presented an Activity Plan Update and highlighted a few items in particular.

+  Richard spoke about the last Community Rail Executive Group (ComREG) meeting and in particular about the Bentham Line’s Year in Industry students project about Access for All and the launch of a new booklet. https://thebenthamline.co.uk/wp-content/uploads/2022/06/access-guide.pdf

+  Also mentioned Northern’s ‘Stations as a Place’ project and asked for any suggestions about the future use of stations.

+  Richard also spoke about the changes to the Lancashire triangle services and that from December 2022 the South Fylde Line will become a ‘stand-alone’ service and the Ormskirk & Colne services will be linked. The services will continue to use platforms 3C & 4C at Preston and work is under way to brighten up this dismal part of the station.

+  Richard also mentioned the Let’s Connect the Community project. This is a project by Connecting East Lancashire (CEL), in partnership with Community Rail Lancashire (CRL), set up as a one-off funding stream in order to support local community projects along the East Lancashire and Clitheroe lines. It is pleasing to report that 5 groups were awarded grants through this fund including Arts2Heal, Rose Grove Neighbourhood Watch, Burnley Football Club in the Community. Amanda Jenkinson will be able to update on the progress being made with these projects

+  Also noted that the DalesRail service has had a poor start with a number of cancellations due to train crew shortages and that active publicity has been suspended with only a news item and Tweets being used once Northern have conformed if the service is running.

Owain Roberts & Martin Keating from Northern gave an update including details of post Covid demand on the routes, performance, the latest on the industrial action, community rail matters and the launch of Northern’s ‘Blue Plaques Map’. The full presentation can be downloaded on this link: Northern Update 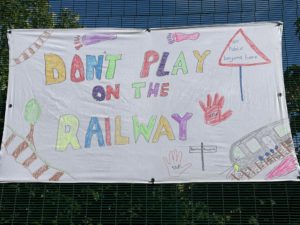 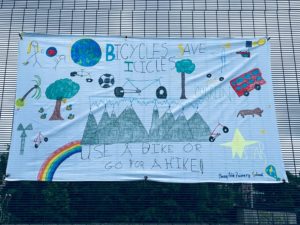 The posters focused on the theme of sustainable travel, and ways to save the planet, and were created as part of an Art on the Move project Rosegrove Neighbourhood Watch became involved in with Community Rail Lancashire and Connect East Lancashire.

Students from Rosegrove Infant, Lowerhouse Juniors, St Augustines RC and Cherry Fold primary schools designed the posters and the artwork was given a special launch event with over 40 children and teachers attending.

And every school was presented with a special trophy for their efforts presented by local councillor Lorraine Mehanna.

Amanda Jenkinson, who is Project Officer for Planning and Environment Lancashire County Council thanked the neighbourhood watch volunteers for their hard work saying: “The organisation put into this project is amazing so please extend my thanks to all involved.

“The artwork looks absolutely fantastic and the children have done a wonderful job.”