The Management Group of the Joint Clitheroe Line & East Lancashire CRPs met on Friday 20th April 2018 in the home of Community Rail Lancashire at Accrington station.

The first business of the day was the Annual General Meeting and following the acceptance of the minutes from the 2017 meeting business moved to the election of officers. During 2017 Chairman James Syson stood down as he was moving to a new position with Rail North. 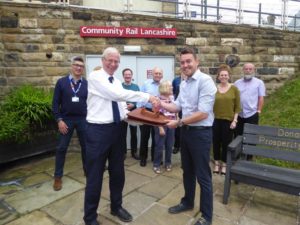 Marjorie Birch, Vice Chair, had been covering the Chair’s role for the remainder of last year and was nominated to take over for the 2018/19 year. Marjorie was elected nem. con. and then chaired the rest of the meeting.

There were no declared nominations for a replacement Vice Chair and it was suggested in the meeting that Melanie Taylor (Blackburn with Darwen) may like to take on the role and she agreed to give this some consideration. Richard Watts was nominated and re-elected as Secretary nem. con.

The Annual General Meeting was followed by a regular Management Group meeting and details of this can be seen below.

+ Clitheroe/Blackburn to Manchester to be extended to Rochdale

+   Noted that performance has once again been very poor:

+   Station Improvements are progressing well along the East Lancashire Line

Blackburn with Darwen – Melanie Taylor spoke about the Access Grant (£80k) and what it might be used for – key areas are improving facilities and signage at local stations. Possible project with the Northern Apprentices.

ACoRP – Ian Davis noted that the awards nomination portal is now open and hopes that many CRPs will enter. Noted that ACoRP were very impressed with CRL at the Line Plan Review Meeting (Action Plan) and wants to use CRL to mentor other CRPs.