It is with great regret that we have to report that Howard Hammersley passed away on Sunday 18th January 2015 after a short stay in hospital.

Howard has long been associated with the railway and developed a whole range of walks based on the railways across the north of England. However, his biggest involvement was in masterminding each year’s DalesRail programme which he oversaw from conception to implementation. It was a rare Sunday when Howard was not on DalesRail ensuring all the details of the days programme would work, looking after the passengers on the train and carrying out meticulous counts of those joining and alighting the trains. His reports were works of art and detailed who did what, what the weather was like and the condition of the train! Woe betide the operator if you couldn’t eat your breakfast off the toilet floor! Howard built up a dedicated and enthusiastic team of volunteer walk leaders who turned out every Sunday and in all weathers. His infectious enthusiasm motivated everyone around him. He will be sorely missed.

Richard Watts, Rail Development Team Manager for Lancashire County Council, said “Howard was DalesRail for me. He bridged the gap between those in the industry and the volunteers who made the service work. Without his single minded determination DalesRail would not have become the great success it has. Yet he was also self-effacing preferring to get on with the job rather than seeking media attention. I will miss Howard very much as a colleague and a friend and my thoughts and condolences go out to Sue and his family”.

Craig Harrop, Client & Stakeholder Manager for Northern Rail said “The continuous hard work and dedication Howard gave to DalesRail over the years has ensured its enduring popularity. Howard was very much part of our on board team every Sunday throughout the summer months and will be greatly missed by both our customers and traincrew. Our thoughts go out to his family and friends.” 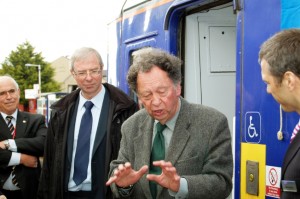