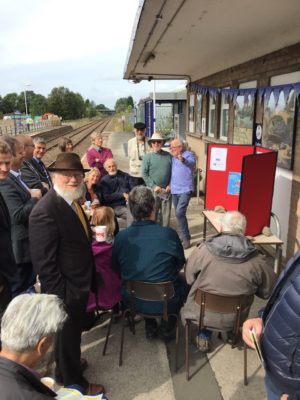 “FOBS members have worked hard to bring the local community and the railway closer together and to develop the station for the benefit of all parties”; said the Chairman of FOBS, Gerald Townson.  He added,  “the station acts as a colourful snapshot of the community for the half-a-million passengers who travel on the Bentham Line annually.”

He thanked Bloomin’ Bentham for the colourful planters and gardens which brighten up the station area. Of particular note was a new water fountain that had been added to the waiting room and the replacement of wooden bench on the platform with one made from recycled plastic. 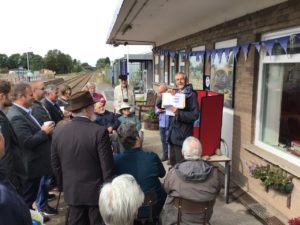 A special cause for celebration was the receipt of Social Stations Investment Fund grant towards an exciting new project for Bentham to become a 100% Green Energy Station.  With a flat roof on the building it was calculated that with 30 solar panels it would be possible to generate all the electricity required for the station including new led platform lights, information screens, ticket machines and within the offices. Richard Wilson, who had devised the scheme, hoped that it would become an exemplar, not just for stations, but for other buildings within the town, such as the town hall, and Richard Isaac, for Northern said, “it was proof that local involvement works: it had been a challenge to deliver the proposal effectively but the result was absolutely fantastic and would act as an example to other stations across the Northern franchise area.” 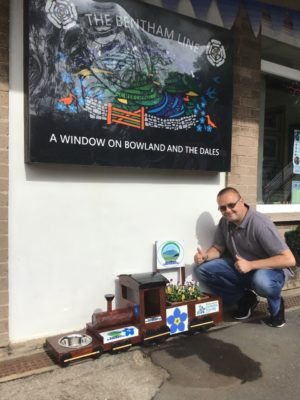 Another event was the unveiling of a model train made by local resident, Martin Gardiner.  This incorporated dementia-friendly markings to underline the continued involvement of the CRP and FOBS in the wider approach to dementia awareness which they are championing. It would be displayed outside and included provision for a drinking bowl for dogs. 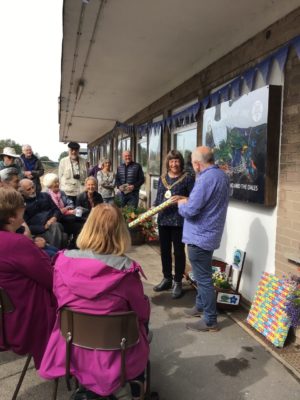 The date also commemorated the third anniversary of the twinning of FOBS with MSP and a new Bentham poster was presented to the Deputy Mayor of Hebden Royd, where Mytholmroyd is situated. In return a framed photographic keepsake was presented to Gerald by Geoff and Sue Mitchell, Chairman and Secretary, respectively, of MSP.

In anticipation of MSP soon acquiring their own building at Mytholmroyd Gerald presented Geoff and Sue with a clock.  The Deputy Mayor of Hebden Royd, who accompanied them, thanked FOBS for their hospitality and looked forward to the reciprocal visit to the Calder Valley the following week. 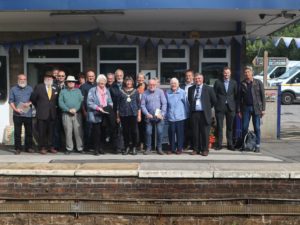