Friday 2nd December 2016 saw the Friends of Bentham Station (FoBS) hold their 2016 Annual General Meeting in the station buildings at Bentham. The group were also celebrating five years of looking after the station and its environs. 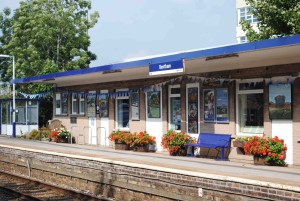 The AGM saw all the existing officers re-elected with the following holding office for another year.

Gerald presented his 2016 Annual Report at the meeting and highlights of the year include: the ‘pop up’ café for the Queen’s 90th birthday celebrations and the ‘Station to Station across Yorkshire’ which saw Bentham station twinned with Mytholmroyd station on the Calder Valley route.

The big one for the group was being shortlisted in two categories at ACoRP’s National Community Rail Awards in Southport in September. Taking gold status in the ‘It’s Your Station’ category and a first in the ‘Best Community Engagement Event’ category made it a great night for the group.

The group who look after the gardens, planters and platforms at Bentham station are all volunteers and meet regularly on the station to hold working parties and also meet formally every two months in the station buildings.

Gerald’s full report can be downloaded by clicking this link: FoBS Annual Report