A historic milestone as first ever electric train runs into Blackpool North station. 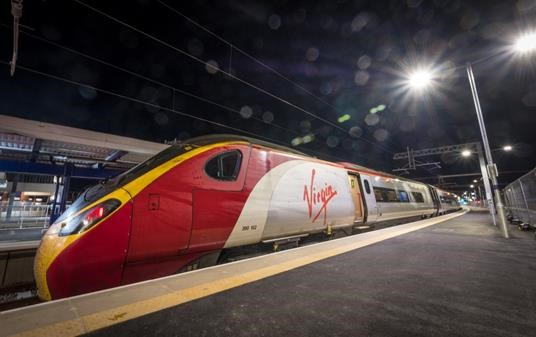 An electric train has travelled to and from Blackpool for the first time ever as the transformation of the railway in the north continues.

As part of the Great North Rail Project, a Pendolino, operated by Virgin Trains was used to test the new infrastructure ;last night (14 may 2018) along the 17 mile route between Blackpool North and Preston ahead of Sunday’s timetable change.

The new timetable will see operators Northern and Virgin Trains introduce, quieter and more reliable trains to and from Blackpool. The train travelled from Preston to Blackpool North and back under the supervision of Network Rail’s Team Orange engineers who were on hand to check and inspect the route’s new overhead equipment.

Martin Frobisher, route managing director, for Network Rail’s London North Western route, said; “The successful testing of the newly electrified railway is the latest step to provide customers with a better, more reliable railway. “The Great North Rail Project is transforming rail travel across the north of England and passengers are now in touching distance of better journeys between Preston and Blackpool”.

Michael Stewart, General Manager at Virgin Trains on the west coast, said; “We’re really excited to have reached this landmark by welcoming our Pendolino train to Blackpool North. This will allow us to test the infrastructure, as we prepare to launch our new electric service to and from the resort next Monday.”

In the last 18 months network rail’s Team Orange has installed over 1,000 steel structures and 200,000 metres of electric wires, as well as replacing every moving part on the railway between Preston and Blackpool North. A new and improved track layout, modern signalling system and electrification mean that passengers in Lancashire are set to benefit from better journeys on the Fylde Coast.