REPAIRS to a 500,000-tonne landslip will see the Settle to Carlisle railway line fully reopen to trains by the end of March 2017, Network Rail announced yesterday.

Engineers are building an enormous concrete and steel, tunnel-like structure that will sit beneath the railway, 70 metres above the River Eden, to provide a stable base across the damaged and unstable ground. Two rows of high-strength piles – steel tubes filled with concrete – will then be driven into the sloping bedrock of the Eden gorge, north of Armathwaite. The hundreds of piles will form a corridor, set into the hillside, on which a 1.5 metre-thick, 100 metre-long concrete slab will then be placed. This slab will form a solid base for the tracks. 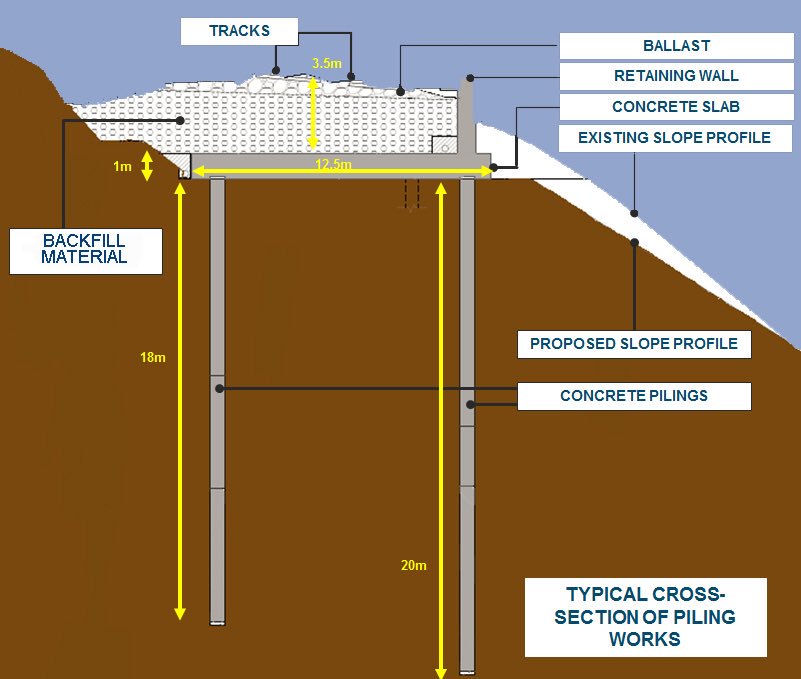 This £23 million engineering solution was selected by Network Rail from among six possible options.

This structure will stabilise a section of gorge bank above the River Eden which gave way in February causing ground below the railway to slip 1.5 metres below its normal level in the weeks that followed.

Since then the line has been shut, initially between Appleby and Carlisle, until Northern services began running as far as Armathwaite in June, with buses operating between Armathwaite and Carlisle.

In addition to the solid structure being built beneath the railway, an extensive earthworks project, costing an estimated £5 million, is planned to protect the foot of the bank down to the river. Drainage systems and ‘rock armour’, which helps prevent erosion, followed by tree replanting will stabilise the land.

Martin Frobisher, Managing Director for Network Rail’s London North Western route, said: “The tunnel-like structure we’re building will safeguard this section of railway for generations to come. If the land gives way again, the railway will not.”

“This is a complex repair job many months in the planning. We are now focused on getting this iconic and much-loved line fully reopened right the way to Carlisle as soon as possible, which according to our programme of work will be by the end of March 2017.”

“We recognise the impact the closure of the line between Appleby and Carlisle has had on local communities, especially during the summer tourist season, and we’re really pleased Northern now have services running as far as Armathwaite. We would remind people that the Settle-Carlisle Line remains very much open for business.”

The train service on the Settle – Carlisle line is still operating. Trains are running from Leeds to Appleby and/or Armathwaite and return with connecting rail replacement buses to Carlisle (and return) calling at the intermediate stations – click the link here to download the special timetable.