Community Rail Lancashire hosted a visit from the Department for Transport yesterday.

The visit started at Preston and with a trip along the East Lancashire Line listening to  a commentary about the work of the CRP at the various stations. Next was a visit to the Accrington Bunker, home of Community Rail Lancashire where the group watched a presentation of the work of CRL led by Richard Watts, Chair of CRL Ltd and Secretary of the four CRPs and ably supported by Community Rail Officers Brian Haworth, Emily Elliott and Simon Clarke. 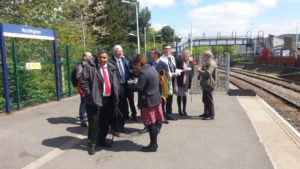 The group ready to depart from Accrington 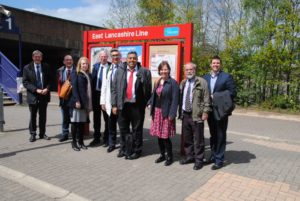 The group then went on to tour some of the other stations along the route including Rose Grove to see the recent improvements carried out as part of the Rose Grove Revived Project. Burnley Central was next where a new project is just starting under the ‘Young Arts Arriva’ banner. 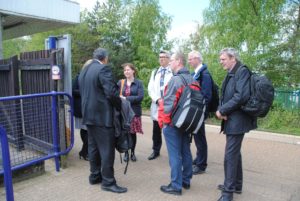 The group then travelled back to Blackburn to see the parts of the old station building that form parts of the Blackburn Station Masterplan that should see the station transformed into a community and transport hub.