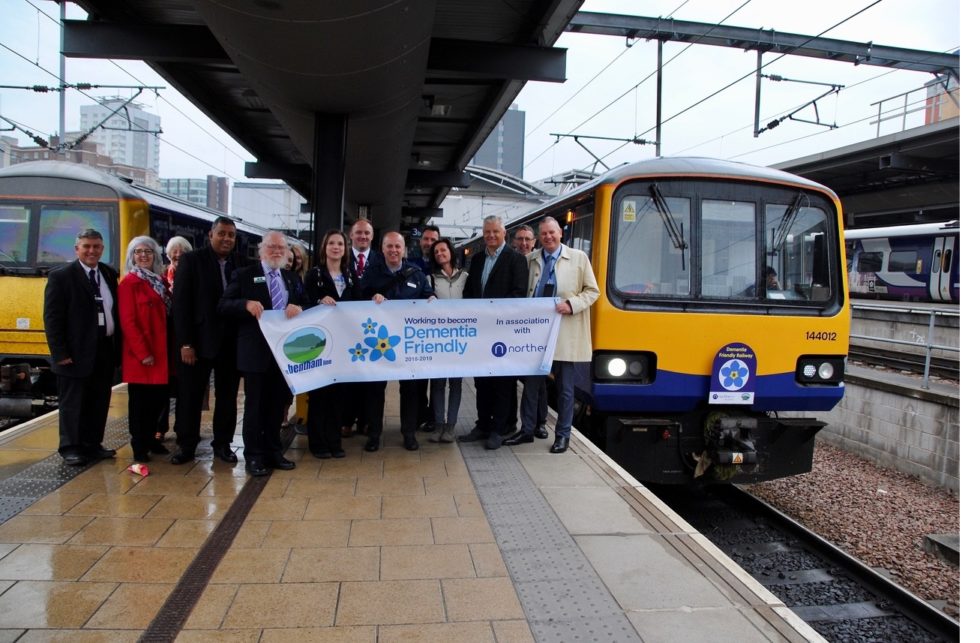 Spirits were high as fifty guests gathered at Bentham station on Friday 25th May for the official launch of the Dementia and Community Rail Project lead by the Leeds-Morecambe Community Rail Partnership (the Bentham Line). The Partnership have been working hard over the past 18 months to create the first dementia-friendly railway line in Britain.

Guests, including senior representatives from Northern, the local train operator, the Department for Transport, Transport for the North and the Association of Community Rail Partnerships (ACoRP) boarded a special train complete with a commemorative headboard, forget-me-not signage and project posters, at Leeds mid-morning. The train picked up further guests en route at Shipley, Keighley and Skipton, including a group of people living with dementia and their supporters who had helped during the development of the project.

In addition to representatives from the rail industry there were individuals from various bodies working with the Partnership along the route including; the Alzheimer’s Society based in Shipley, Dementia-Friendly Keighley, Bentham and District Dementia-Friendly Community, Dementia Forward, the Forest of Bowland AONB, Friends of Bentham Station. Representatives from North Yorkshire County Council and Craven District Council attended too, as well as other local community-based railway groups.

On arrival at Bentham, the guests were warmly welcomed by Gerald Townson, Chairman of the Community Rail Partnership. Gerald highlighted the importance of the inclusivity aspects of the project and detailed the positive effects it is beginning to have on the rail industry, locally on the Bentham Line, regionally within Northern and nationally with other community rail lines and train operating companies. 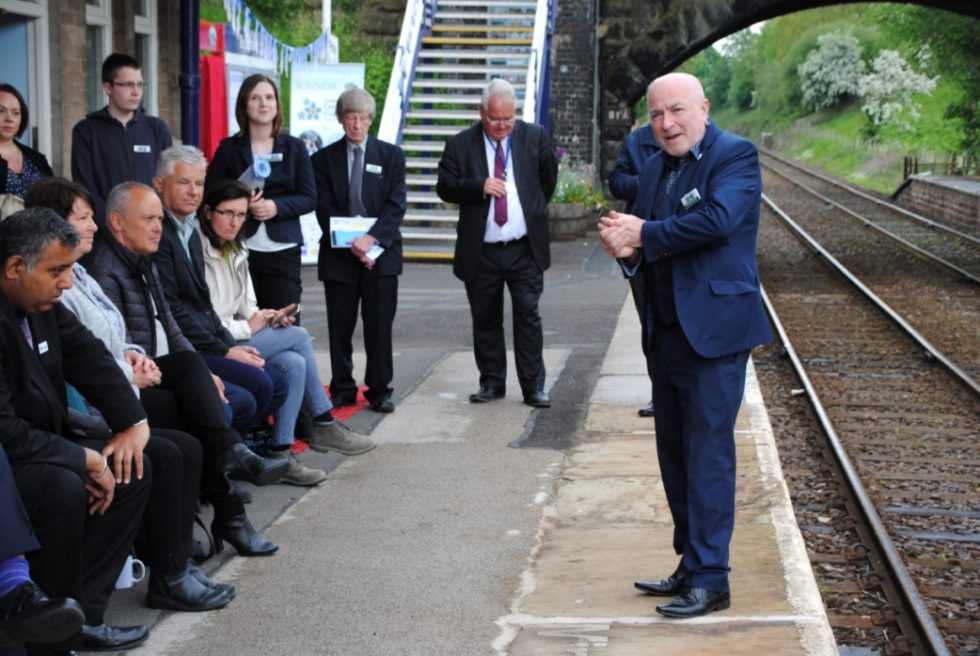 The project focusses on four main areas of development: the raising staff, volunteer and passenger awareness of dementia, supporting journeys for those living with dementia and their carers, working to create dementia friendly stations and services; establishing a range of supporting activities, including dementia-friendly walks from stations on the Bentham Line.

Gerald also took the opportunity to thank all those who had so generously given their help and time to the project, creating firm foundations on which to develop the project further.

Kulvinder Bassi, Community Rail Team Leader at the Department for Transport, responded by praising the work of the Bentham Line Partnership and the positive leading approach it was giving to the railway with regard to social inclusion and caring for those with ‘hidden’ disabilities, in particular. 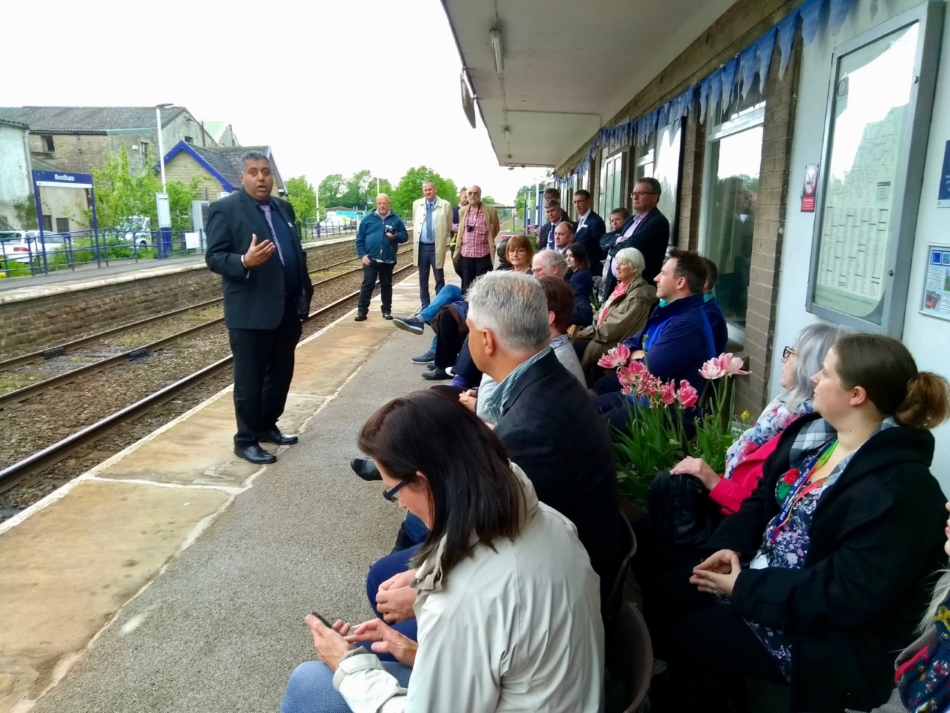 Jools Townsend, Chief Executive of ACoRP added; “We feel very proud to be supporting this crucial project, which is already making such a difference to people’s lives. We, and our members across Britain, feel passionately that our railways should be accessible and welcoming to all, and that everyone should be able to benefit from our railways – and this project is taking important steps to ensure that’s the case among people living with dementia. Railways are often the lifeblood of communities, providing access to all sorts of opportunities, and connections with other people and places, and that should not stop if you are affected by dementia personally or within your family. The Bentham Line is demonstrating exactly what community rail is all about – reaching out to local people, drawing on their perspectives, and helping to ensure their needs are understood and met at stations and through train travel. It’s an exemplary project, and the first of its kind, and we will be working to encourage other community rail partnerships and groups across the country to consider adapting it for their areas.” 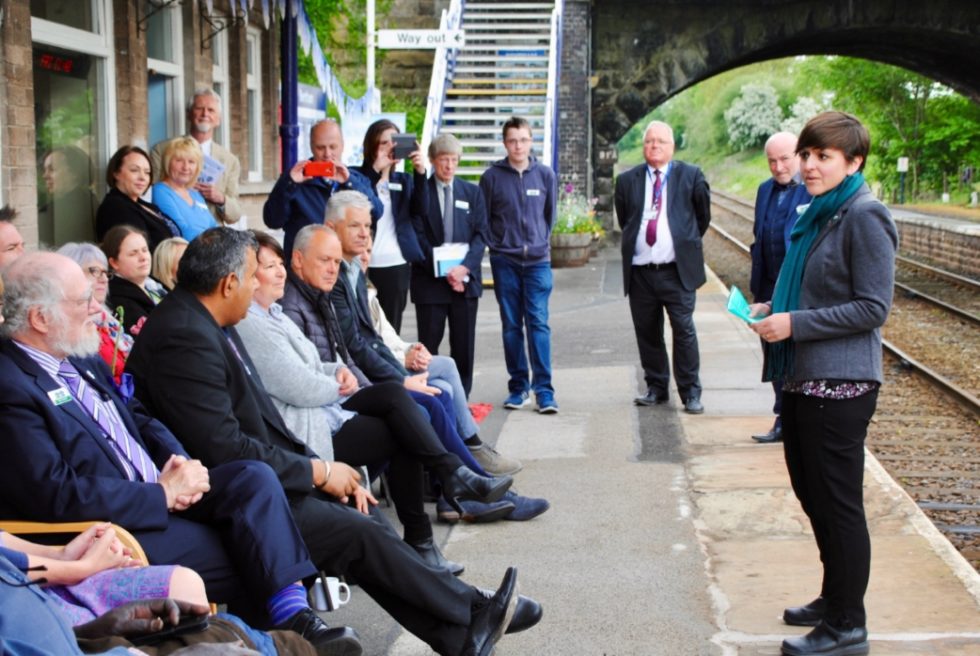 Pete Myers, Client and Stakeholder Manager speaking on behalf of Paul Barnfield, Regional Director – East, Arriva Rail North Ltd. (Northern) remarked; “The railway is important especially to the communities that we serve, but now and again you come across something that is far more important. I am incredibly proud just to be a small part of the fantastic project started here by our friends from the Bentham Line. It will not stop on the Bentham Line, however, and my team and I will do all that we can do to make sure the whole industry wakes up to the good they can do in helping people to live well with dementia.

Paul Smithson representing the Alzheimer’s Society said: “People affected by dementia regularly experience issues with travel whether it be through the lack of understanding by staff and other travellers, difficulties with their own management of a journey due to the impact of their dementia or physical barriers such as poor signage and difficult to interpret timetable information. People with dementia tell us that transport systems that neither understand nor support their needs are one of the barriers to their continued involvement in community life and can lead to isolation.”

“The Bentham Line Community Partnership has looked practically at these issues and created a dementia friendly rail experience on the line from Leeds to Morecambe, whilst involving people directly in the business is testament both to their forward thinking, ingenuity and desire to show people can and should continue to access and enjoy the railways alongside everyone else.”

There were several guests who are living with dementia and one of them contributed some of their experiences in travelling by rail, alongside Paul.

Reflections on the project were also made by County Councillor Caroline Dickinson, North Yorkshire’s Executive Member for Public Health, Prevention and Supported Housing, reminded people that, “In North Yorkshire we have around 10,000 people living with dementia. Our dementia strategy – ‘Bring Me Sunshine’ – is an important document because it sets out the improvements we want to make for people whose lives are affected by the disease. “It’s so important to spread the message that it is possible to live well with dementia, and that people living with dementia have a valuable role to play in their communities. Initiatives such as the work by the Leeds-Morecambe Community Rail Partnership play a vital part in making that aspiration a reality.”

Adam Timewell for the added that, “The Rail North Partnership is proud to support the creation of the first Dementia Friendly Line in the North. Leeds – Morecambe Community Rail Partnership and Arriva Rail North have produced a truly outstanding social inclusion scheme that will help to improve the lives of those living with dementia. Congratulations to everyone involved in this fantastic project which highlights the benefits of community rail.”

Throughout the summer and autumn, Gerald and the Vice-Chairman of the Partnership, Rod Tickner, who is a Dementia Friends Champion will continue to offer dementia awareness sessions to the front-line staff along the route.

Over the coming weeks, the Partnership will begin to host groups of people living with dementia and their carers on journeys along the Bentham line and at various destinations, including Morecambe.

In September, the project will be taken south to the Department for Transport, in London, where it will form part of a social inclusion market place event and provide an opportunity for civil servants, train operators and southern community rail partnerships to learn more about what is being developed for those with dementia and other hidden disabilities.