Drizzle did nothing to dampen the spirits of a group of people from Dementia Friendly Keighley who enjoyed a day out in the Forest of Bowland AONB on Monday 3rd September when everyone had a thoroughly enjoyable day.

The trip to Gisburn Forest near Slaidburn was organised by the Bentham Line (Leeds-Morecambe Community Rail Partnership) with assistance from Northern the local rail operator and the Forest of Bowland AONB.

The group travelled by train from Keighley to Bentham where after a comfort break they transferred to a luxury coach provided for the journey through spectacular scenery, via Clapham village and Bowland Knotts summit, to the start of a specially adapted walk, the Birch Hills Trail.

This trail has been designed to be of special assistance to those living with dementia and is on the edge of Stocks reservoir. It is way-marked and the route has a dementia ‘forget-me-not’ symbols on the direction posts. Benches and picnic tables have been provided by the Forestry Commission at regular intervals around the walk.

There is a well designed picnic area, managed by United Utilities, at the start of the trail, which we used before transferring to the nearby bird hide to view the flocks on the reservoir and for our sweet course so the cakes did not get wet!

We were accompanied by Nick Garnett, a journalist who works for BBC Radio 5 Live who was using the opportunity to find out what we are doing through the Community Rail Partnership and how we are making a positive impact on those living with dementia, their carers and supporters, to produce a news report. 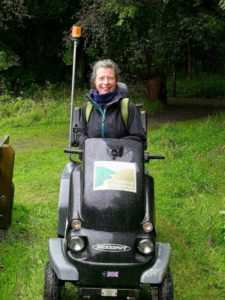 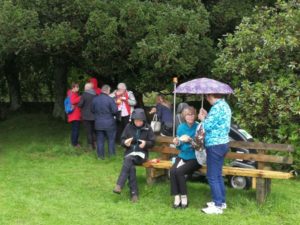 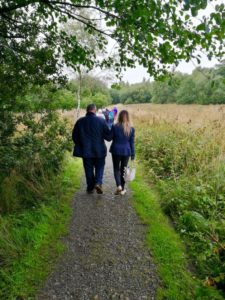 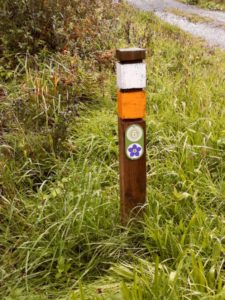 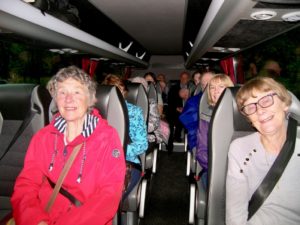 This is the latest event in a continuing programme of opening up the use of the Bentham Line to those living with dementia, along with their careers and supporters, to enjoy a day out. Previous supported visits have been to Morecambe but as well there are possible trips to other destinations along the line, including a dementia-friendly walk at Saltaire, especially for those wanting a day out from the Morecambe and Lancaster ends of the line.

Gerald Townson, Chair of the Bentham Line said: “The overall feeling I had from the day was one of ‘renewed confidence’ from those participating with people expressing the thought ‘I can still do this’”.

One of the guests told us that: “the support was great and essential’, and another: “it’s great to be out and about with friends and supporters having a happy time”.

We also tried out a special all-terrain electric buggy which can be used by those with reduced mobility who can use the simple controls.

Rod Tickner of Dementia Friendly Keighley and Vice-Chair of the Bentham Line stated “This was the first time we had undertaken this particular trip which involved a number of agencies and it is extremely heartening to see how well it all worked and what we have achieved today will become a model for future such events. The comments such as ‘I feel great now I have done this’ and ‘a wonderful experience’ make the preparation all worthwhile”.

Nick, from Radio 5 Live, also found it a very useful time and he had plenty of opportunity to ask people about their experiences of living with dementia. His recordings on the day were used to create audio and video recordings which were broadcast on the radio station on Friday 7th September and released on the BBC News website the same day. The link to the video is:

The video was also broadcast on BBC Look North, and North West Tonight the regional news programs the same weekend.

The Bentham Line Community Rail Partnership is now looking forward to welcoming a further group from Keighley and two groups from Skipton to the line over the next few weeks.

Contact detail: for the partnership are: telephone 015242 98940 and email the.bentham.line@gmail.com

The Dementia Friendly Railway Project has been funded by Arriva Rail North’s Seed Corn Fund and is a partnership between The Bentham Line CRP, Arriva Rail North and the Forest of Bowland AONB.